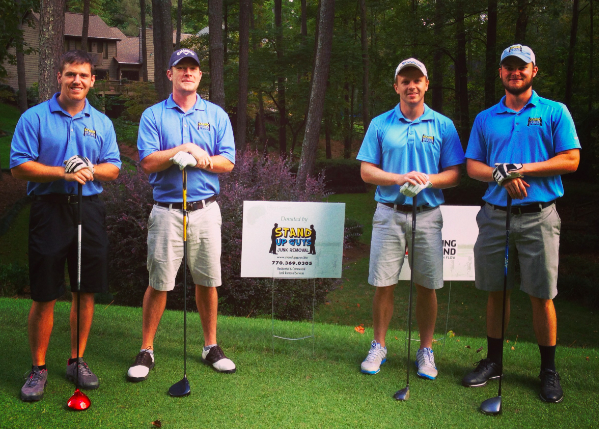 Stand Up Guys is always looking for ways to contribute to charity. Last year, we heard of a golf tournament through a friend and real estate agent for Remax, Venessa Creech. This event immediately caught our attention for two reasons: our love for the game of golf and the charities purpose. After doing considerable research on the foundation, Stand Up Guys found out that the proceeds of the fundraiser would help underprivileged kids play sport they love. As if we didn’t want to take part already, now we had the opportunity to share our passions while competing with the best, most promising young golfers that the state has to offer.

Once we decided the fundraiser was a go, it was time for us to choose which four employees would take part. Because we are such talented group of athletes, Stand Up Guys always has the ability to turn the smallest task into the greatest competition. Every team member has played competitive sports, so naturally we are all the best at everything we do. In the spirit of fun, we decided to hold our own golf tournament. It was decided beforehand that the winning four employees would be the four to take part in the event, but that the remaining few would have the chance to help in some way. Since the fundraiser was months away, we set a date for our competition and brainstormed a way for the 5th, 6th, 7th, and 8th place finishers to help. Stand up Guys concluded that since we have had such success with marketing through social media, we would utilize these resources to help spread the word of the tournament. It became our responsibility to devote as much time and energy towards this event as our work would allow, and we would not accept anything less.

The day of our personal work tournament arrived, and you might as well have strapped us in camouflage and laced us with black make-up. We had eight employees fighting for four spots in the fundraiser, each employee equally confident in his success. This is where the friendship of each Stand Up Guys truly prevailed: in the way we knew how to mess with one-another. it was a day of tough competition, but in the end, Carson, Casey, Ross, and Clark finished in the final four and were prepared to carry the same energy into the event with Christiaan, David, Philip, and Paul admirably accepting their defeat, dedicating themselves for the next month to spreading the word through social media.

On the day of the tournament, we were told to arrive by 10:30 AM at the Country Club of Roswell, but we decided to show an hour early to get a head start on all of the younger players (it had ABSOLUTELY nothing to do with us being older and needing longer to stretch). When we arrived, the guys were amazed at the work the charity had done for the event. The ball room was dressed in tables of food and beverages, surrounded by silent auction items; everything from a Matt Ryan jersey to an ugly picture of Bobby Dodd stadium. Just kidding. The range was fixed with all of the golf balls that we could hit, and the course was in noticeably great shape. We were ready and in the spirit of giving, all more excited to see this young talent compete than to actually play ourselves.

Stand Up Guys was assigned to start play on the 14th hole, which ironically was the hole that we sponsored. Our first two holes began slow with pars, but coming to the 16th, a short, beautiful par 3, we noticed the finishing touches the charity had put on for all of the participants. There was a bar set up with a sponsors alcoholic beverages, giving free vodka and beer to the players. Nice touch! Although we collectively refused, it gave Stand Up Guys the audiences we needed to showcase our talent, which was the kickstart to our first birdie and the start to a respectable 65, or 7 under par.

As the tournament continued, we had the chance both young, talented juniors and professionals, alike. There was a PGA professional named Beth whose job was to ride around the course, offering help to groups that needed it. We didn’t use her enough. The charity also positioned skillful young players on two of the 18 holes, helping participants with tee shots and, in most cases, giving them a strong advantage.

By days end, Stand Up Guys knew we had lost, but were incredibly grateful for the opportunity to meet so many influential people and the chance to contribute to such a respectable cause. The night concluded with an invite back into the ball room for dinner and the awards ceremony and presentation. It was then that we found out that one of our own, Mr. Carson Gibson, won the long drive contest. Normally, we would be very excited about this, but the Stand Up Guys were too submerged in the delicious menu that was prepared, accompanied by cheesecake bites for dessert. Yum. Shortly following our meal, the Guys said our farewell’s and called it a night with our heads held high and the realization that maybe we aren’t actually as good at golf than we originally had thought, knowing that there’s no way we’re missing our next opportunity to contribute to such a great cause.