A Wonderfully Junky Day In Cobb

The Stand Up Crew was at it again today, just like any other day, driving around picking up and cleaning up junk. We just try to make the world a better place one day at a time. We don’t try to brag, but comeon’, we are pretty awesome. 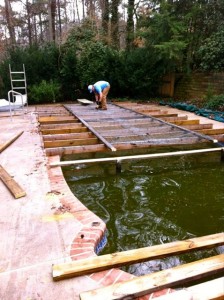 Today started out a little slow because of all the rain, the fog, and the awesome Atlanta traffic. But we were able to fight through it and make it to our first few jobs right on time, and just like always we left them all as satisfied customers. After all, that is what we do best.

Our last job in particular though, was a nice little house out in Cobb, with a whole heap of junk in the garage, but the thing that struck us as odd was the one big item in the back yard that was a first for us. Now when it comes to “firsts” for us, it’s rare. Mainly because of how long we have been in the junk-game, there just isn’t much at this point, that we haven’t seen.

Anyway, this customer had an enormous wired fencing structure over their pool. We weren’t quite sure why it was there, but in our best guess was, it was to keep someone out, probably like kids or something, so that they didn’t get themselves hurt while rough housing in the back yard, and our best guess is as good as any because we are awesome!

Well, because this was a first for us, it took us at least a minute or two to figure out what exactly we were going to do with it, and how we were going to get it into the truck. One of the problems was, it was much to large to carry all by itself, and the other problem was trying to take it apart. If we were to try to take it apart where it was at the time, whoever was the lucky guy to cut all the wire, would have most likely fallen straight into the pool. 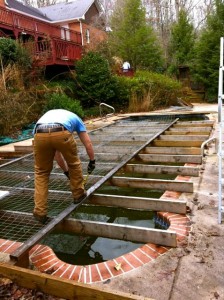 So we put our heads together and came up with a solid game plan to knock this bad boy out, and leave with another wonderfully happy customer.

We took a few two by fours that were in the original pile of junk from the garage, and braced them under the odd pool cover structure thingy, and used it as leverage to flip the structure over. Once flipped, the structure lie perfectly placed on the yard, and now was a breeze to cut up and haul to the truck.

We were able to cut up, and save all the metal from the wiring, to recycle later, and we used a sawzaw to cut the wood into small, manageable pieces. Once that was all done, we loaded it all up, and hit the road. Off we go to save some more people of Atlanta from their own JUNK!