The Call In From Cumberland – Atlanta 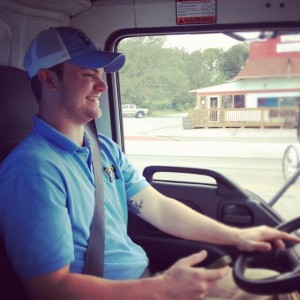 On Wednesday we got a call into our office from a new potential customer in the Cumberland, Atlanta area. The customers name was Walter, who was an extremely polite old man, but he was in quite the conundrum with a pile of junk in the backyard of his home.

The Stand Up Guys Junk Removal Crew have worked out in the Cumberland area many, many times. So right off the bat we told Walter that we could help him out with whatever problem or situation he had. Walter was pumped to hear this and glad he had found the right people for the job.

Supposedly Walter had called a few different junk removal companies and couldn’t get anyone on the phone half the time, and the other half of the time he said that they acted to busy to talk to him. 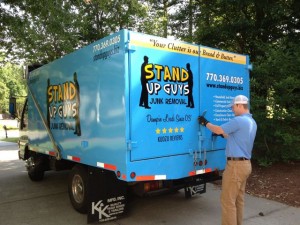 Carson With The Truck

Walter went on to tell Ryan, who was working the phones that day, that he had a pile of junk that had accumulated over the last few weeks in his backyard. He told him that the pile started out small as he was tearing out his old bathroom. Walter was just piling up the leftover debris in the backyard at first not thinking it would turn into much.

Well before Walter knew it, the pile had become to big for him to handle with his little pick up truck. So it just sat there and got larger and larger, and nastier and nastier.

The pile wound up sitting there in the backyard of Walters Cumberland home for over a week, when the real problem was brought to his attention…

Walter has two adorable black labs that live with him, Cookie and Ginger. Walter built a large fence around his entire property so that Cookie and Ginger could roam the yard whenever they please and live the awesome life of a free dog. 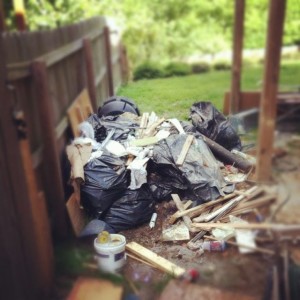 When Walter would go off to work in mornings the two black labs just go in and out the doggy door whenever they feel like it. Basically they have the free reign to go and do what they please when they please.

Well when Walter got home from work the other day he realized that Cookie was getting into the pile of junk while he was off at work, Ginger wasn’t because she’s not as curious as Cookie. Walter got scared that Cookie was going to get into the wrong thing and eat something that could get her sick, like the paint thinner or rotted wood that was in there.

So as you can imagine Walter wanted to get this pile removed as soon as possible because he felt bad now that when he left for work during the day that he had to lock up the doggy door so that Cookie wouldn’t go rummaging through the pile of junk in the backyard. 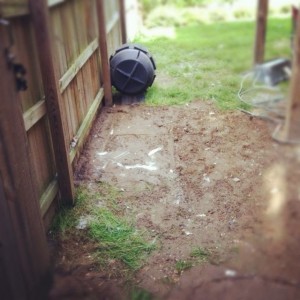 Well once Walter called into the Stand Up Guys Junk Removal office, he quickly realized that we were the solution to his junk problem. We told Walter not to worry and that we could be there either that day or the next to take care of everything for him. We could tell that he was stressing over the situation and we were definitely willing to do whatever it took to take care of this for him as soon as possible.

Walter expressed to us his concern about his poor little doggies and that he didn’t want to leave them in the house another minute.

So of course, the Stand Up Guys Junk Removal Crew dropped what they were doing, moved some things around, and headed straight for Cumberland to take care of Walters junky problem.

When the crew arrived at the Cumberland home right outside of Atlanta, they backed into the driveway, hopped out of the truck, and went directly to the backyard. Walter told us he wasn’t going to be there because he was stuck at work, so we knew where to go and what to do.

The guys saw right away what the issue was (the pile of junk was in plain sight once you opened the gate to the backyard). Carson, the crew chief quickly called Walter on the phone and told him how much we could do it for. Walter gave the go ahead and the crew got right to work.

The walk was up a slight grade in the backyard so the guys decided to pile everything up onto a lawn tarp and dragging the junk to the truck. That way they could get a whole lot more junk with every trip to the truck.

Carson and his jolly good junky fellows worked hard, efficiently, and fast and before they knew it everything was done. They had the entire pile of junk cleaned up and loaded into one of our famous junk trucks.

Carson took a picture of the clean pile and emailed it over to Walter as soon as they finished up so that he could see that everything was done. We do that for the customers piece of mind, so that they KNOW that we got the job done. Walter was ecstatic and quickly sent in his payment over the phone and that was that. Walter got out of his junk bind with just one phone call to the right company.

Oh ya, there was one more thing. Walter politely asked Carson if he would go up on the back porch and unlock the doggy door from the outside so that Cookie and Ginger could go back out to the wonderful outdoors and roam the yard once again. Carson had no problem with that. He even stayed for just a minute to hang with the cool pups before him and the crew had to ride out to the next job.

All in all it was a great experience for Walter and we were glad that we could accommodate him and take care of everything he needed in a timely fashion.