Early yesterday morning, Sherry, a new customer, called into our office. She explained to us the problem that she had, and wanted to know if we could help. The Stand Up Guys Junk Removal Crew deal with different types of junk problems all the time, so we told her there a good chance we can. Sherry’s problem was that her mother, will call her Grandma Williams, was turning into quite the hoarder, and Sherry wanted help taming her “hoarderness“.

Sherry went on to told us that her, and her brother Adam had been trying to sneak junk out of Grandma Williams basement for months. They were only able to sneak small amounts at a time, so as you can imagine, Sherry and Adam weren’t getting much head way in cleaning away the massive amount of junk.

We told Sherry and Adam that they were in luck, because here at Stand Up Guys Junk Removal we deal with hoarders, and junk collectors all the time. We told them that we could help, and that the easiest way would be for the two of them to sit down with Grandma Williams and explain to her what was about to go down. This way once we arrived, the blow to her wouldn’t be so massive. For those of you that don’t understand hoarders, they have problems letting go of their junk, so this isn’t a very easy process for them.

Grandmas First Encounter With The Stand Up Guys 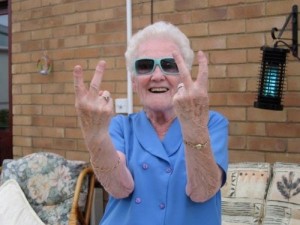 The Stand Up Guys Crew arrived at Grandma Williams house in Roswell, early this morning. To our surprise, Grandma was happy to see the crew, which was made up of some of our best. We had Clark, Carson, Ross and Casey on the job today, all the big wigs at Stand Up Guys.

Grandma Williams embraced us nicely, and acted as if she was totally on board, and ready to get rid of all her junk. Sherry took us aside before we went in, and told us to beware, because Grandma Williams has a tendency to change her tone rather quickly, if we start messing with her precious junk.

The Crew reassured Sherry and Adam that we had dealt with these types of situations many times in the past, and that even a disgruntled Grandma wasn’t going to bother us.

In Her Roswell Home Basement

The Stand Up Guys Crew walked down to the basement, and saw the disaster, that was “Grandmas junk”. I mean she had junk everywhere. Some of the junk in the basement looked like it was from before even Grandma was born, and she was pushing 88.

Grandma Williams started in, talking about everything that was in the basement. She sounded like a typical hoarder, which isn’t bad by the way. She was explaining the meaning, and sentimental value Â behind each and every item. She was putting value on some things, that 99% of the world would consider garbage, not just junk, but garbage. We knew that this was going to be a rough one, it was extremely apparent that she wasn’t going to let go of this junk very easily.

The Stand Up Guys Crew 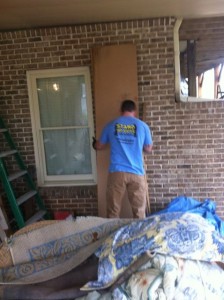 Clark, A Stand Up Guy

We told Grandma that we were going to go upstairs for just a minute, and that we would be right back down. With us came Adam.

We all went upstairs to devise a plan, and run it over with Adam, to make sure that everyone was on board. Our plan was to tell Grandma Williams that we were just going to move all the “junk” up to the car port and re-organize everything for her up there. We explained to Adam that this would be the easiest transition for her, and that as we were moving junk away from the basement, that he needed to express to her what he thought was junk, and what should be thrown away.

Adam said he was on board, we broke the huddle, and went down to tell Grandma the plan, and she emphaticallyÂ said “let’s do this!”

One Piece Of Junk At A Time 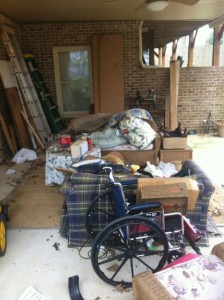 Well, just as we told Grandma Williams we would, we carefully lugged every “junk” item from down in the basement all the way up to the car port. Also, just as we told Adam, he was expressing to his mother how he felt about all the items one by one as we carried them up. We figured this would soften the blow, and make it easier for Grandma to let the items go. Also we thought it would be easier for her to let them go one she saw them in a different setting, the car port.

Just like we thought, the great idea worked. By the time we had all the items up to the car port from the basement, Grandma Williams was already expressing how she didn’t want a few of the items. So it was a great start. The things that she said she didn’t want were thrown directly into the truck, to never be seen again.

As the junk pile in the car port was dwindling down, you could see that Grandma Williams was starting to come around. She was letting go of items faster and faster as the time wound down. After she would say, “that one can be trashed,” Sherry would congratulate her, and so would the Crew. We were all just so proud of Grandma.

Everybody Wins With The Stand Up Guys 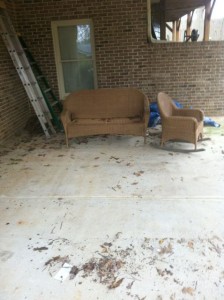 Piece by piece, the junk pile that the Stand Up Guys Junk Removal Crew created in the car port of Grandmas Roswell home, was disappearing. It was becoming easier and easier for Grandma Williams to let go. Before we knew it, it was all gone, and the basement, car port, and now almost the entire house was cleared of it’s annoying junk.

You could tell that Grandmas Williams was proud of herself, and her children were proud of her too. Grandma Williams was just glowing. She was so happy once this was all done that she hugged every single Stand Up Guys Crew member, and said she hoped to see us again soon.

Now, I wish I could say that every hoarder case of ours ends this way, but that would be a lie. Most hoarders aren’t as mentally strong as Grandma was on this day, and we all learned something from her. That is, that all of us can change, and even better ourselves if we put forth the effort and believe in ourselves.

From everyone here at Stand Up Guys Junk Removal, we would like to say, thank you Grandma Williams, we learned so much from you.