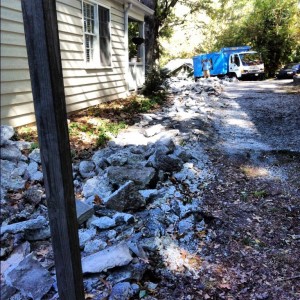 Fred is a local handyman and recently took on the job of demoing a sidewalk and part of a driveway for one of his customers in North Druid Hills. Not realizing that the broken up concrete would take up so much space in the front yard, he now had a big problem on his hands because his customers were not able to drive their cars in the garage. After three days of tearing up concrete, Fred was now able to find a solution.

Renting a dumpster was his first choice, and most ideal. This way he could set the dumpster on the property and load it up himself so he would not have to subcontract the job out. But, seeing that there was no level ground for a dumpster to be rolled off on to, he had to take a different route. Junk removal companies were his second choice. Finding a company that was insured was a big concern of Fred’s because of the danger of getting hurt on the job.

He called a few “mom and pop” companies, but they were not insured and did not have the equipment to complete the job. Although they were dirt cheap, Fred quickly found out, you get what you pay for. His next call was to Stand Up Guys Junk Removal. Fred was very impressed right off the bat with the professionalism over the phone. He knew they had everything he needed to complete the job. Man power, dump trucks, tools and customer service! Needless to say, Stand Up Guys have the full package!

Carson, who answered the phone when Fred called, explained how the Stand Up Guys operated and what steps needed to be taken in order for the job to be completed. Fred understood everything and was excited about the price. What made it even better was that he found out he did not have to lift a finger during the whole job duration! He was used to doing everything himself and was relieved to hear of our service. 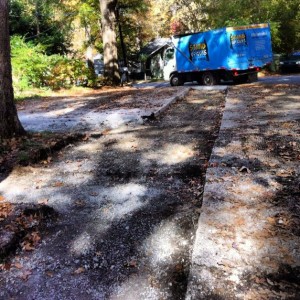 Clark arrived at the North Druid Hills property with his two crews ready to devour the rubble. After delegating each mans duties, Clark “The Ox”, took the bigger pieces himself by hauling them with his wheelbarrow. The rest of the guys backed up the truck to the first pile and started loading. Little by little the crew was making progress and the concrete was diminishing.

When dealing with concrete, the guys can only fill it up in the truck halfway at most due to the weight. Anymore than that can put a serious strain on the truck. A few more trips will not slow Clark and his crew down, it just pushes them to work harder.

When working on a job like this, with time constraints, multiple men on site working and the strain of hard work, it requires a certain type of leader to get things done. It requires a man with knowledge, conviction, power and a little bit of savvy to get the job done. That man is without a doubt Clark. He was born to run these crews to get this job done and that is exactly what he did.

Finally the last load was in the truck and nothing but a clean driveway was left!

Fred arrived to see the magnificent job they had done and was very pleased at how fast it was completed. He recommended us to all his business partners and said he was now a customer for life. Clark was pround of his job and blushed a little when Fred said that.

Another customer in need, left with a big ol’ grin! Stand Up Guys approved! 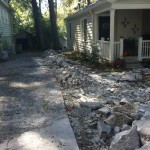 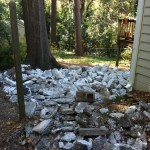 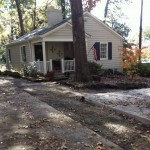 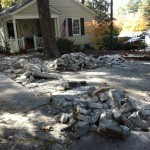 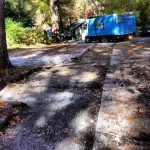 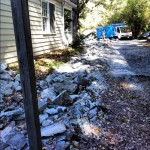