Melinda, a repeat customer of the Stand Up Guys Junk Removal Crew called in last month to tell us her plans to remodel her living room. Melinda wanted to call us a head of time so that we could have her on our schedule with plenty of notice, because at this point Melinda’s biggest concern was having a huge nasty pile of debris on her driveway for too long. 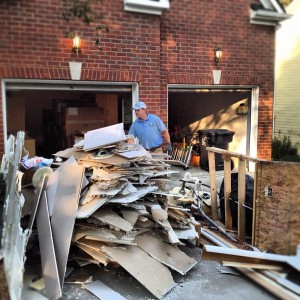 In Melinda’s neighborhood in Alpharetta, a big pile of debris anywhere on the property is frowned upon. No matter how long or how short of a period of time it’s out there.

The last time we worked with Melinda she was having the Stand Up Guys Junk Removal Crew remove all the old junk furniture out of her basement. Meanwhile she was telling us her plans of remodeling the upstairs living room.

Clark, who was on site that day with Melinda suggested to her that she hired the Stand Up Guys to continuously keep her house clean during the remodeling project. This was music to Melinda’s ears, because before this conversation she had been trying to wrap her brain around whether to get a big ugly dumpster to sit on her driveway or not.

To Melinda, having the Stand Up Guys come out a few times and remove all the construction debris rather than having a dumpster out there full-time was just a fabulous idea. She wouldn’t have to worry about the dumpster being an eye sore, and her home would continuously stay clean. Perfect plan.

Why the Stand Up Guys were at Melinda’s house removing all her junk basement furniture, she also told the guys why she was remodeling the upstairs. 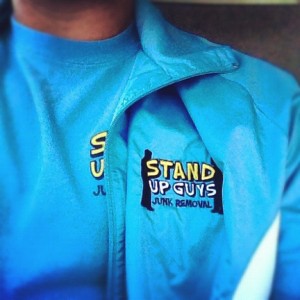 A Name You Can Trust

Melinda said that when she first bought her Alpharetta home over 10 years ago, her dream was to remodel the living room to fit exactly what she wished. She told herself as soon as she got the promotion to ‘Creative Manager’ at work she would reward herself with the remodel.

At the time, Melinda figured that she would get her promotion within a year to a max, two years. She was sure of it. Well that didn’t work out. She said some new hot-shot young guns were hired at her company and one of those jokers was given the job before her.

A few years later the company realized that promoting the young gun was a mistake. So more than ten years later, after Melinda made the goal of getting promoted she was. She also said it was well worth the wait, and the best part for her was doing a fantastic job and making her hierarchy’s look stupid for not hiring her in the first place.

Now that Melinda had her promotion and reached her goal, it was time for the remodel of her living room. She was finally going to transform it into exactly what she always dreamed of.

Melinda looked around for a few weeks, got some quotes and met a few contractors. When she found the perfect company for her situation she went ahead and pulled the trigger. Within just weeks of her promotion, Melinda had her great remodel underway.

The First Clean Up

Melinda called into the Stand Up Guys Junk Headquarters once the remodel got underway. She wanted to know exactly what to do with all the construction debris as the job was going. Casey, who answered Melinda’s call that day asked to speak with the contractor. This way they could be on the same page. 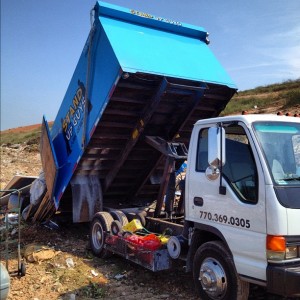 Casey and the contractor went over all the junk and debris they would be taking out at first, where the best place for them to keep it was, and what the time line looked like.

Well, everything went as planned. The contractor said that the first two days were going to be spent ripping out all the old sheet rock and flooring from the living room. The contractor also said they would stack everything on the driveway for easy access.

As soon as they were finishing up with the demo inside, the contractor had Melinda call us. Right when we got the call we sent over our first available truck to get the job done.

Now that all the demo was done in the living room the crew wouldn’t be making much of a mess from here on out, until the very end that is. While remodeling the living room, we asked the contractor if they could stack all the construction debris that they accumulated from her on out in the garage. This way it wouldn’t cause an eye sore for the neighborhood.

The first pile was accumulated and removed very fast, so it wasn’t much of an eye sore. The second pile would take weeks to accumulate, so it’s much better for that one to be in the garage. We told them to just give us a call when that one is ready to go and we would be right over to grab it as well.

Melinda was very happy with the beginning of the job. The guys were getting to work fast on her new awesome living room, and we cleaned up the driveway in the blink of an eye.

We hope the rest of the project goes smooth for Melinda as well. We all know she deserves the best.