Pile of Construction Debris in Marietta 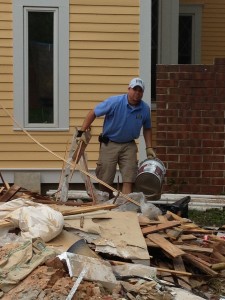 For the job Joe was working on now and the pile of construction debris he had created in the back of his customers Marietta home, he needed our junk removal service. The pile wasn’t extremely large, so he knew he could save a little with our junk removal service. Not to mention the pile was about 100 feet or so from the driveway, so he didn’t want to be hauling all that debris to the truck himself. It’s much easier when you have someone else do it.

When Joe called in he got Carson on the other line. He told Carson that he should be finishing up the job in a day or two, and that it would be nice to get it out of his customers back yard the day that he finished. He didn’t want to get the work done to early and have more stuff to be picked up later, and he didn’t want the stuff to be picked up too long after the job was done. That would most likely upset the customer.

So Joe needed the construction debris pile picked up on an exact date and at an exact time. He knew the only company he could count on to get a job like that done was The Stand Up Guys.

Joe scheduled for the following Monday between 8-10am. This was the time that Joe NEEDED to have the construction debris hauled off. It couldn’t be earlier and it couldn’t be any later. 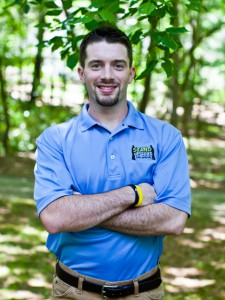 Well, lo and behold, Christiaan and Paul rolled up at the Marietta home with an empty truck at 8:01am ready to rock and roll. Joe wasn’t even surprised to see the bright blue Stand Up Guys Junk Truck roll up right on time, that’s what he has learned to expect from the Stand Up Guys in all the years he’s been using us.

When the guys pulled up, Christiaan hopped out of the truck and greeted his old friend Contractor Joe. After talking briefly, the two gentlemen walked around back of the Marietta home to take a look at the pile of construction debris.

Christiaan looked over the pile for a minute or two, gave Joe the best possible price he could and Joe said “Awesome, lets do it!”

Christiaan walked back to the truck to get Paul and tell him what was about to go down. Christiaan always likes to have a set plan before he starts a junk job. So he ran over everything with Paul, how they were going to move the junk, and who was going to do what. It was a flawless plan. 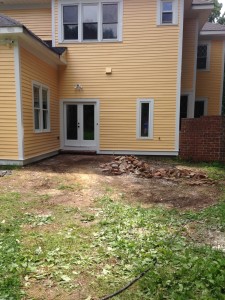 First the two Stand Up Guys fished through the pile of junk and grabbed all the biggest pieces they could find. Each time they had a hand full of big pieces they would walk it to the truck and stack it nicely in the bed of the junk truck.

Once all the big pieces were gathered and put in the truck, Christiaan got out the contractor bags and they both began to fill them up with the smaller debris. Once there was about 15 bags filled, Christiaan had Paul start running them to the truck while he finished filling up the rest of the bags.

Before they knew it, the entire pile was cleaned (except for the bricks that Joe wanted them to leave) and in the truck. Contractor Joe wasn’t even surprised that it was done so fast. He has come to understand the awesomeness of the Stand Up Guys and wouldn’t expect anything else.