Katie, and old customer of ours that lives in the Marietta area put a call into our Stand Up Guys Junk Headquarters yesterday. She called because she got herself into a little bit of a pinch. She had an old junk couch that had to go, and go fast. 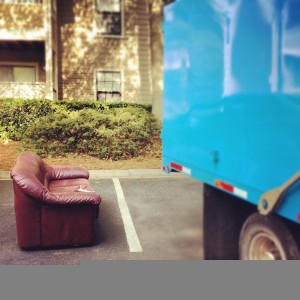 Katie and her new fiance Billy just combined homes after their engagement. The couple decided to move into Katie’s Marietta home because of its size.

Other than the fact that Katie has a beautiful home, Marietta is a wonderful place to live as well. I myself have lived in a few different Metro Atlanta areas, and I must say, Marietta takes the cake. Nicest place to live in all of Atlanta.

Katie has a pretty common Marietta home, it has three bedrooms and two baths, along with a finished basement. It’s a nice house, I wouldn’t have wanted to leave it either if I were Katie. There was no way the two were going to squeeze into Billy’s small Sandy Springs condo, so they packed his stuff up and shipped it to Marietta.

The couple badly underestimated the amount of “stuff” coming from Billy’s condo though. They found out real fast that they weren’t going to have enough space for all the new furniture coming in. Billy brought everything he owned to Katie’s home, he literally left nothing behind, and didn’t throw anything out either. He even brought his 10-year-old couch from college. 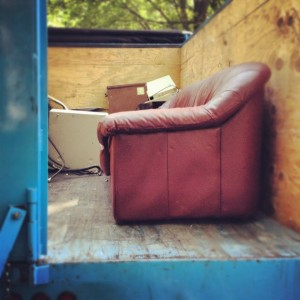 This is a pretty common thing with people combining homes from what we have seen over the years. There is only so much space to go around and most people have more stuff then they really think they do. We see people make this underestimated mistake on a regular basis. That didn’t make Katie feel any better about the situation though.

Well the real problem wasn’t even the fact that they didn’t have enough space for all of Billy’s furniture. The real problem was that Katie’s parents were coming in town to celebrate the engagement, and they had planned on staying in Katie’s spare bedroom (where Billy left that old couch of his).

At the moment there wasn’t even a spare bedroom because Billy’s junk was taking up the whole room. So now Katie had to find a way to get this room gutted out, arrange her parents trip, start her wedding planning, and celebrate her engagement all at the same time.

There was only one way for poor Katie to get this little problem fixed, and that was to hire some professionals to get this stuff done. Luckily she had used the Stand Up Guys Junk Removal Crew a few months back, and because of this she knew the answer to her problem.

The only other question was, could they get it done in time?

Stand Up Guys Junk Removal To The Rescue 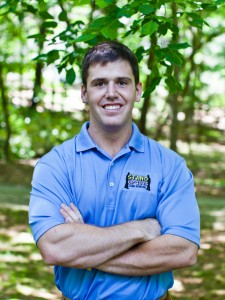 Yesterday when Katie called into the office, we could tell that she was a little “flustered” to say the least. She expressed to us the problem she was having with this old couch and some other junk in her spare bedroom. She also told us that it couldn’t wait either. This stuff HAD to go today, or she was going to be in an even bigger mess.

We soothed Katie’s anxiety slightly by telling her we were going to dispatch a crew as soon as possible. Casey had Clark and Christiaan out on the road headed towards Katie’s Marietta home before she was even off the phone with her. We knew she was in a bind so we were going to do what we could to help her out of this crappy situation.

Clark and Christiaan showed up at Katie and Billy’s home within 30 mins of her calling in. It would have been 15 minutes but Ryan forgot to fill the work truck up with gas the last time he was out on the job, so Clark had to stop and fill up. He didn’t care though, Clark never has a problem taking one for the team.

Katie quickly showed Clark and Christiaan where the junk and old couch were that her fiance Billy had brought over from his condo, and told them it had to go. Oh ya, I forgot to mention that Katie hadn’t actually told Billy this couch was getting tossed, but I guess he would find out soon. Welcome to marriage Billy, looks like Katie will be making a majority of the decisions from now on.

Well Clark and Christiaan took the old couch out of the spare bedroom and had it nice and neat in the back of our junk truck in no time. The guys could tell that the couch had some good miles left in it, so they made sure to not ding it up. They figured that they could donate it later. Just because Katie doesn’t like the color or what not doesn’t necessarily mean someone else out there wouldn’t want it.

All in all everyone was happy, (except Billy of course). Katie got that old couch out of her spare bedroom and was able to make it presentable and livable enough for her parents. So we know she was happy, well she expressed to us HOW happy she was that we got it done when we did in person as well.

We were happy to help Katie out. She was in a bit of a rush and had herself in a pickle, but she still found the time to be sweet and courteous to our crew just like she was the last time that we came out and cleaned all the junk from her garage. Some  people out there will always find a way to be a nice person, and we are glad that Katie is one of these people. It was a pleasure to work for her, and we hope her and Billy the best.

Stand Up Guys came to the junkie rescue again.