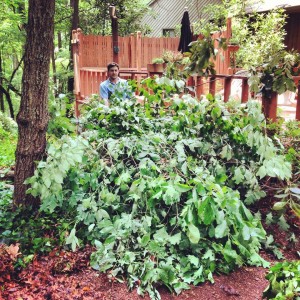 Susan, one of Stand Up Guys favorite customers, called into the Stand Up Guys Junk Removal Head Quarters last week with a little dilemma. Susan has used the Stand Up Guys many, many times in the past at her Atlanta home, so whenever she has an issue with junk or debris, she knows who to call right away.

When Susan called in to HQ she got Ryan on the other line. Ryan greeted Susan like an old friend, then simply asked her “what can we do to help you, Susan?“ Susan went on to explain to Ryan the predicament that she was in. Susan was leaving town for a whole week in just two days. She was out in the yard working the day before and created a much, much bigger pile of debris in her front yard than she ever thought she would.

Susan has pretty strict neighbors and HOA, so the last thing she wanted to do was leave this big pile of debris that she created out in the front yard the entire time she was gone on vaca. So basically she needed the pile removed from her Atlanta home as soon as possible, this way she wouldn’t have to deal with any headaches while on her trip.

Ryan told Susan not to worry, and that we would take care of everything for her like we always do. Ryan even asked her if she preferred a crew out there same day or the next morning. Susan said it would be best to have the guys out the next morning when she was positive she could be there to greet them. 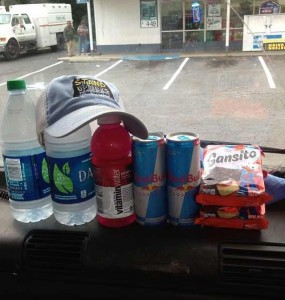 The very next morning, bright and early, Christiaan and Corey headed out to Susan’s Atlanta home. Christiaan had actually been over to Susan’s more than seven or eight times now, for various jobs. So he knew the deal. He didn’t even need a GPS to get there. All Ryan put on the schedule was ‘Susan’s House‘ and Christiaan knew what to do with the rest.

Christiaan and Corey stopped off at the QT right down the street from Susan’s just before they got there. They had to make sure they got all their fluids and fuel before the job started. Christiaan always makes sure he has a liter of water and a can of RedBull before a job like this. He always likes to stay prepared.

The Crew pulled up to Susan’s Atlanta home right at 8am on the dot (just like she requested). Christiaan hopped out of the truck and scooted over to the front door to greet Susan and see what was on the table for today. Susan was happy to see the guys like always. She said “Hi, Christiaan, follow me to the side yard and I’ll show you the damage. Haha.” 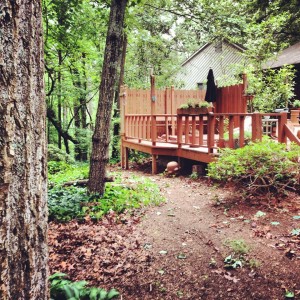 Christiaan took a good hard look at the pile of debris, gave Susan the best price he could, got the go-ahead, turned towards the truck and yelled out to Corey “Let’s get to work!”

Corey knew the deal. He hopped into the drivers seat of the Junk Truck and started to back it up as close to the debris pile as possible, all while Christiaan was backing him up with hand signals. Once the truck was in the perfect spot, both Stand Up Guys grabbed their gear and got ready to roll.

The debris pile was big, but more than anything it was just cumbersome. So the two Stand Up Guys would section off pieces of the pile and rip it out in huge chunks. Each enormous chunk could be dragged to the truck by just one guy. That’s how light the debris was. Once they would get a section to the truck, one guy would hop in the back of the truck and help drag the debris into the truck. Then set it in the back strategically and stomp on it to make sure it took up minimal amounts of space.

The two Stand Up Guys repeated this process only about six or seven times before the pile was almost completely gone. After that there was only little scraps left over. They got our their rakes and bags and cleaned up the rest until it was spotless.

Susan came out with some Gatorade for the guys, but to her amazement they were already finishing up. She gasped “Wow, you guys always seem to amaze me!”

Susan was very pleased to say the least. She knew she could count on the Stand Up Guys to take care of her debris dilemma, like always. She said goodbye to Christiaan and Corey and thanked them again. They told her it was their pleasure and that they just wanted to make sure she had a grand ole time on her vacation!