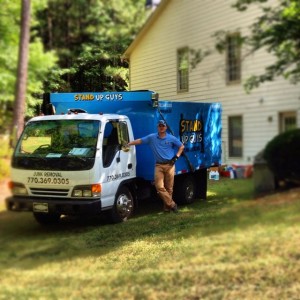 Carson answered the phone when Joanne called in, and asked her how we could help. Joanne went on to tell Carson about her junk and debris issue…

Joanne was sick and tired of her old deck at her Roswell home. It was 10 years past it’s expiration date and she was just plain tired of looking at it. She was so over the deck that she never even went out to the backyard because she didn’t want to have to look at the old beat up thing. Well, finally she found someone that would build her a new deck, her wonderful Nephew. The only problem was that her Nephew was coming from out of town and didn’t have a ton of time, so he was going to need her to find a way to take the old deck down, so that all he had to do was build a new one when he got there.

Joanne looked around, but couldn’t find anyone to rip down the old deck. All she could find was companies that built decks and when she called junk removal companies in Roswell, they just told her they would remove the deck once it was taken down. They told her there was no way they were messing with a deck demo.

Well Joanne made the right call when she called the Stand Up Guys. Carson told her right away that we could take care of everything and that she didn’t need to worry any longer. Joanne was so relieved, she was beginning to think she was never ever going to find anyone to get this done. Luckily she made the right decision to call the Stand Up Guys.

The very next day Ross and David were headed out to Joanne’s home in Roswell to take care of her deck demo and removal. Ross gave Joanne a courtesy call when he was about 45 minutes away to inform her that he was on his way there, Ross is one of our very best when it comes to perfect customer service.

Just as he predicted, Ross and David showed up at Joanne’s home in Roswell 45 mins after he called. Ross hopped out of the truck and went to the front door to greet Joanne. She was so happy to see Ross! She was just ready for this old deck to be out of her life.

The two walked around back and took a look at the old deck. Ross looked it over for a few minutes, took some mental notes then gave Joanne the best possible price that he could. Joanne was excited and ready to rock and roll!

Ross went back to the truck, got David, went over the game plan and the two got to work. They weren’t messing around either, they had two more junk jobs to do after this and the last thing Ross ever wants to be is late. So this was going to get done as quickly as possible.

First Ross and David used a crow bar and sawzall to remove all the decking boards from the top of the deck. As they were taking them off they were stacking all the running boards in the side yard, this way they could pull up to it with the junk truck and load everything in when they were finished with the demo.

Once all the running boards were off, Ross and David started on the base of the structure. Ross knocked down the 4×4’s that were holding up the top of the deck. Once they fell down the rest of the structure fell with it. Once the entire deck was laying on the ground, all the two guys had to do was use the crow bar to separate the boards. Once they had the boards all separated they finished stacking everything in the pile on the side yard.

Now that the entire deck was down, Ross hopped back into the junk truck and backed it up to the pile that him and David had created. They two guys huffed and puffed and got all the decking debris into the truck in no time.

Joanne came out just as the guys were finishing up. She was SO EXCITED to see that everything was gone. She could not believe how awesome these Stand Up Guys really were. She thanked Ross and David and told them that they lived up to all the hype!