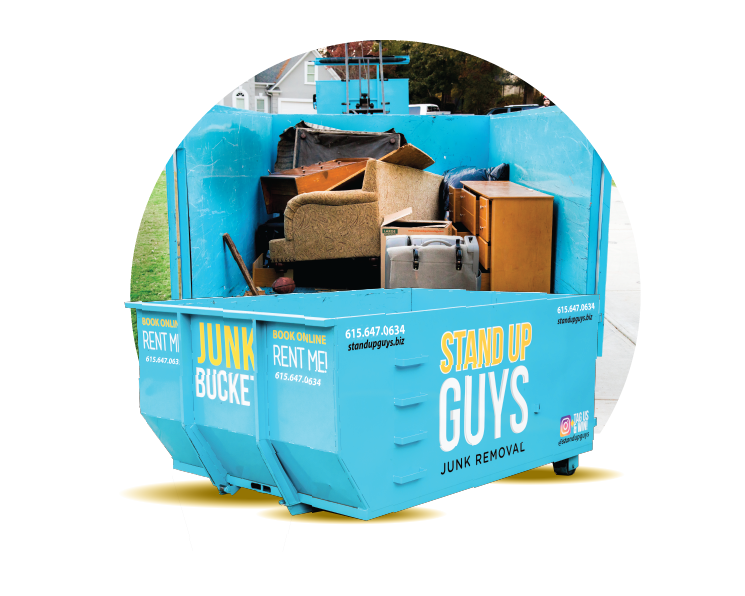 It was a cloudy Tuesday October morning when Bill, a North Carolina resident, placed a call into the Stand Up Guys Junk Removal office in dire need of an honest, reliable and friendly junk removal company to come out to his deceased parents home in the Morningside community in Atlanta. Bill stressed that he and his sister had to clear out all of the junk in the house, which completely consumed every room and the garage/basement, before the end of the month. This was going to be a huge task so they needed someone they could trust! Well you bet they called the right crew!

Ryan went out to take a look at what we would be dealing with and to provide a free estimate. After a walk around the property it was decided not only would they need our junk removal service to clear out the home, but they also would need to rent a “junk bucket” for initial de-cluttering to see for themselves what was going to go and what was going to be donated. Bill and Ryan came to an agreement on price and they were scheduled to have the Junk Bucket the week before the crew actually came out.

The Junk Bucket was dropped and Bill and his sister went to work filling it up. The following week over the coarse of two days Corey and David each went out with their crews and went to town on the home removing years of furniture and knick knacks that were accumulated. Bill admitted that a lot of the items in the basement were he and his sisters stuff that they had asked to store there years and years ago but then never ended up having a need for, this seems to be pretty common amongst adult children and their parents. Over the two days The Stand Up Guys Junk Removal Crew were able to gather up 5 loads and Bill filled up a Junk Bucket! Now that’s a lot of junk people!

We left after our two day stent over there in Atlanta with a high five and a big smile. Bill and his sister called the next day just to express what an incredible experience they had with us! We told them that its just what we do and that we were happy to help. I think its safe to say that if they need any junk removal service again in the future they know whom to call!