Johan, a wonderfully nice lady who lives in Suwanee called into our Stand Up Guys Junk Headquarters last week with a problem. When Johan called in she got Casey on the other line, she went on to explain her issue to him. 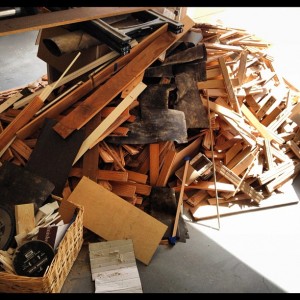 Chris decided on his own that he was going to take up all the old hardwood flooring out from their kitchen and living room, then maybe even put the new hardwood floor in himself. Chris decided to do this on a day that Johan wasn’t around. Wonder why.

Well Johan went on to tell us that she came home later that day to find her home a wreck. Chris had torn out all the hardwood flooring and stacked it all in a pile in the garage. She asked Chris what he was going to do with the pile of junk flooring in the garage, he hadn’t quite thought that far into the plan yet. This is when Johan contacted us.

It didn’t matter to Johan whether or not her husband hired someone to come in and put the new hardwood flooring in or if he did it himself. She knew that he was completely capable of doing it on his own. The only thing that Johan seemed to care about at this point in time was getting rid of all the junk from the garage. It was killing her to see it sitting there. Johan doesn’t like a mess, and this pile was just that. A mess. 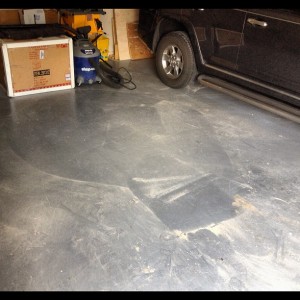 Casey told Johan that we could send a Stand Up Guys Crew out to her home in Suwanee the very next day. He could tell that this was a situation that could not wait. Johan needed this done and she needed it done asap.

The very next morning, bright and early a Stand Up Guys Junk Truck pulled up to Johan and Chris’s Suwanee home. The truck backed into the driveway and Clark hopped out and headed to the front door. Johan greeted Clark and the front door and then took him around to the side of the house to the garage to show him the mess.

Clark gave the pile a good once over and assured Johan that they could take care of everything for her. Johan was relieved to say the least. Clark offered her a great quote, Johan loved the price and told him to get to work as soon as he could.

Clark went back to the truck, told Christiaan (the other Stand Up Gentlemen on site) to back up the truck to the garage. They put on their gloves and got to work.

This was a fairly big pile and Clark wanted to make sure that they fit it all into one load. He didn’t want to have to mess with this pile twice. Clark also knew that getting it all in one trip would be much faster than two, and Johan would be a whole heck of a lot happier if this didn’t take long. This pile irritated her.

Well the two Stand Up Guys huffed and puffed for about 45 mins until the whole pile was stacked neatly into the ‘junk truck‘. Clark was happy that they were able to fit it all, but more than anything he was excited for the opportunity to go tell Johan that everything was done. He knew that she would be extra excited.

Well Clark was right on the money. Johan was ECSTATIC when she saw that the pile was gone. You could tell that this was an enormous weight lifted off of her shoulders.

Clark and Christiaan said their goodbyes to Johan and she thanked them for everything. This was just another job well done from the Stand Up Guys. Another happy customer in the books.

Clark and Christiaan hopped in the ‘junk truck’ drove away from the Suwanee home and headed to the next customers.