The Pandoras Box Of Hot Tub Removals In Atlanta

Alright, well today started out like any other day. We did a nice, simple little garage clean out in Marietta, in the a.m., and then we headed downtown to Atlanta, after we stopped off at the dump, for our second job. Little did we know, the day wasn’t going to be as normal as we had anticipated. 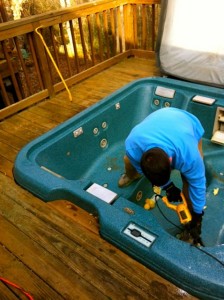 When we arrived at our second job in Atlanta, we knew going in it was a hot tub, but what we didn’t know is how much of a monster this hot tub was. The Stand Up Guys Crew deals with hot tubs on a regular basis, so this sure wasn’t our first rodeo, but this hot tub wasn’t going to go down with out a fight.

When Carson arrived at the job site, he went up and rang the door bell like always, and the customer kindly greeted him. They then walked around the side of the house to look at the hot tub, and that’s when Carson first laid eyes on the montrosity, that was their hot tub. He was so taken back, that he almost was speechless.

The customer went on to tell Carson that we were the third company they had called, because the other two just straight up told her they couldn’t, and wouldn’t do the job. So of course, with Carson never being able to back down from a challenge, told her “No problem, we’ll be done in an hour or so”. 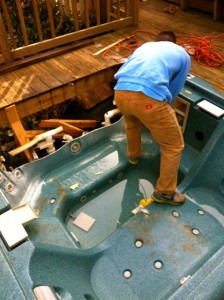 So after such an outlandish statement, Carson now knew that he just put himself, and Clark (the other Stand Up Guy on site), in a predicatment. There was no turning back at this point, the massive hot tub, that they nick named “Pandoras Box“, had to go. No exceptions.

Next, after the rim was detached, they cut the bottom sector of the hot tub into 6 pieces. This way they could manage to pick them up, because if not, there was no lifting the hot tub. After that, they had to take out the ratchet set, and unbolt, and unscrew the entire top liner from the deck.

Well that is all just a vague summary. There was much more involved in the destruction and removal of “Pandoras Box,” but it would take a novel to explain it all.

Long story short, Carson and Clark (aka The Stand Up Guys) finished the job, just as Carson had promised, and they finished in pretty good time as well. The customers were so extactic, and happy for the hot tub to be gone, that they even cooked the two dinner.

After it was all said and done, Carson and Clark drove the big, bad Stand Up Guys Junk Truck off into the distance, with the hot tub in the back, and it was a happy, happy ending.

Clark Gettin At It