Yesterday started just like any other day. Both crews were out and about, making Atlanta a better, cleaner place, one junk pile at a time. Then it happened…

Steve from Johns Creek, one of our oldest customers called into the office right around 11:45am. He was in a hurry too. Steve said that he was trying to sell his house for the last month, and since he knew it would take a while, he postponed cleaning out his back shed, and under his back porch. They were both FILLED with junk. 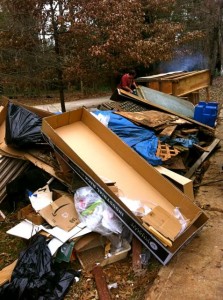 Well, Steve told us he couldn’t wait any longer, because the house sold faster than he had ever anticipated. He needed all that junk cleared out, and removed as quickly as possible. Well Steve made the right call, because that’s the Stand Up Guys specialty. We went right ahead and put Steve down to have a crew come out the very next day in order to get this junky debacle out of his hair.

This morning we deployed our top crew, Carson and Ross. They headed straight to Steve’s house in Johns Creek. Steve lives in a typical, spacious, luxurious Johns Creek home. So, we don’t mind going out there, mainly because we love theÂ scenery of Johns Creek.

Just as expected, Steve’s back shed, and back porch were just filled junk. Carson and Ross took some time to assess the situation. There were tons of fencing, appliances, junk furniture, just a whole heap of junk out there. The two decided on what they would need to complete the job. 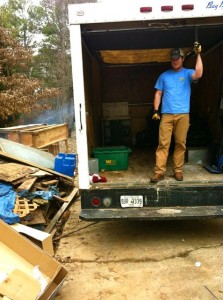 On any normal day, with a normal job, that wasn’t in a time constraint, Carson and Ross would have gotten straight to work and lugged all the junk to the truck themselves. But because Steve was in such a hurry, they pulled out the big guns.

Carson called back into the office, and told us that we needed to send out another crew, and another truck. This way we could be 100% sure that the job would be done in a timely fashion, and that Steve would be satisfied.

The two crews washed, rinsed, and repeated this same process 3 times today, and in the end they were able to finish it all up for good ole Steve. Steve was so relieved, and even a little surprised. He didn’t think in a million years that all that junk would disappear in one day like that, but he didn’t count on the Stand Up Guys being so outstandingly “Stand-Upish” either.

In the end it was a good day for us here at Stand Up Guys. We love you Johns Creek, and we will see you again soon.