Yesterday got a call into headquarters from Jenny, a new customer out of East Atlanta, or what some would call East Atlanta Village. Jenny told us a little about herself, and her problem.

Like many people who call into Stand Up Guys Junk Removal, Jenny was in need of getting rid of her junk, and she was in need of it fast. Sometimes people call us and say we can come whenever, because they aren’t on a time constraint. Every once in a while we get the Jenny’s of the world though, who have to have it done, and have to have it done fast. For them, we drop whatever it is we are doing, and get to it as fast as possible. 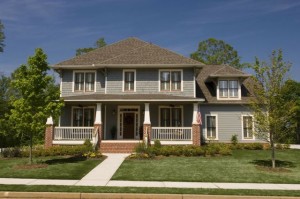 Jenny told us that she invited her husband’s family in town to go to the Sweet 16, part of the NCAA Basketball Tournament, that was being held right here in Atlanta. Her husband John, had a big family, and a ton of basketball fans to boot. So when she asked, they didn’t hesitate, and they didn’t hesitate to bring the Calvary either.

Originally Jenny just asked if Johns brothers wanted to come up, but once John’s mother got wind of this, she was coming right along for the ride.

Usually Jenny has no problem with her mother in law, from what she told us at least, but the one thing that her mother in law doesn’t like is a mess. Jenny has had her over tons of times, and it never was a problem before. But this time was different.

The dilemma was the fact that Jenny didn’t originally plan on so many people coming to her house. She invited 2, and it turned into 8. Well Jenny and John have a big house, but just like a lot of other people, they don’t ever use the spare bedrooms, unless it’s to hoard junk.

Well, Jenny knew that her mother in law would not be pleased to stay in the spare bedroom that was filled with junk, and neither would the other seven guests that were coming. Jenny’s real dilemma wasn’t just her in-laws, but her dilemma was havoc this junk was causing, and that junk had to go, and go now! 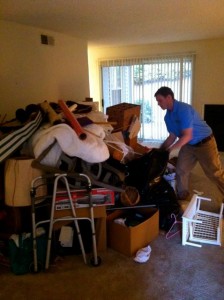 Ryan Gettin’ At It

Jenny knew that this was a serious problem, and she knew she had to take care of it fast, because her husband’s family was headed there soon, and Jenny had no time to waste.

The first thing Jenny did was get on the internet, and go to kudzu.com. She told us that she used kudzu quite a few times in the past, and it never let her down. So when it came to all this household junk that she needed to get rid of, she was hoping that kudzu would come through one more time.

When Jenny typed in the phrase “household junk removal” the first listing that popped up was non other than Stand Up Guys Junk Removal. Little did Jenny know how lucky she really was that she found the right professionals.

She said that she went on to reading all the awesome reviews that customers had left on our kudzu page, and said right then and there she knew that we were the ones for her. The answer was clear for Jenny and getting rid of that nasty household junk in her East Atlanta home, it was the Stand Up Guys. 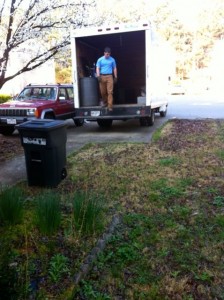 When Jenny called in, and told one of our reps at the office about this dilemma, we didn’t hesitate and got right on it.

Ryan and Clark (a couple Stand Up Guys big shots) were working at a shopping center over in Midtown, cleaning out an old dry cleaners. We do a lot of commercial junk removal, and property clean outs in that area, so it isn’t uncommon for us to be seen there. This was a job that the customer was in no hurry to get done, so we knew that the guys could take a little time off to take care of Jenny and her household junk.

Ryan and Clark dropped everything they were doing and headed right for East Atlanta from Midtown. Ryan and Clark were miraculously at Jenny’s door step within exactly one hour of her calling in to our office. She could not have been happier, or more surprised. It’s nice to live up to our name, unlike some other sad companies.

Jenny walked through the house with the two “Stand Up Guys” and showed them everything that had to go. Jenny figured that since we were already here, that she might as well get rid of some of the junk in her basement as well. Heck, I would have done the same thing. This is a wonderful service, and we press for people to take full advantage of it.

Ryan and Clarky Bear got right to work, and started lugging all of Jenny’s junk to the truck from her home. East Atlanta driveways are typically small, and Jenny’s was no different, so the guys had to park out on the street, and haul everything across the yard. Trust me when I tell you this, they don’t care. Stand Up Guys do whatever it takes to get the job done.

Ryan and Clark finished up cleaning everything, and hauling all the household junk to the truck. Jenny was just so pleased, and the guys finished with time to spare. The in-laws were still at least 3 hours from arriving.

So not only did Jenny get all the junk out of her East Atlanta home in time, but she also had some extra time to herself, because she know just how crazy her house was going to be for the next few days.

Once again the Stand Up Guys Junk Removal Crew saved the day. Your welcome Jenny! Don’t forget to tell your friends!