Todd has lived in the same Kennesaw home for over 30 years and has accumulated quite a bit of household junk over that time. He recently took on the job of helping out one of his friends in need by letting him move into his basement to help him get back on his feet. Todd’s first step was clearing out all his unwanted junk from the basement to make space for his friend. This was a job way past overdue, so there was no better time than now to get started. 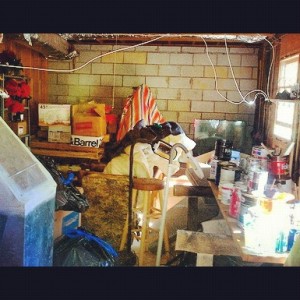 This project was too big for Todd to take on himself. He had to go through everything and decide if it was junk or keepers. Todd knew that he could take on that job by himself and later call a company to come take his junk away. He thought about renting a “bagster” but it has to be placed on his driveway or front yard. All of Todd’s junk is located in his basement and that means he would have to haul everything up himself then wait for the bagster to be picked up. Todd didn’t want to have to deal with doing all that work himself, and he had heard some pretty bad reviews about the ‘bagster’, so that was a route he quickly decided against.

Todd did not have time to wait around, he was ready to get this junk out now. He went to his refrigerator to grab a cola when the baby blue magnet on his fridge caught his eye. The magnet was left there by his neighbor a few months before. The magnet was doused in baby blue and read Stand Up Guys Junk Removal! This was the answer to all of Todd’s junk problems. 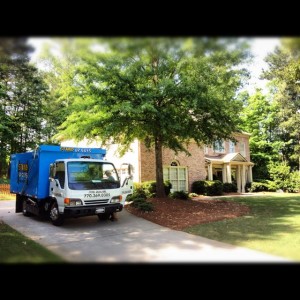 Todd didn’t even wait around, he pulled his phone right out of his pocket and called the number on the magnet right away. Like I said, he wasn’t waiting around, he was ready for this junk to go ASAP.

Carson answered Todd’s phone call and started to explain how we operated and explained how we charge so Todd could have an idea since he had never done anything like this in the past, obviously. Todd soon realized that the value of the service was above and beyond the price.

Getting his basement cleared out was worth more to him that the prices. Plus, since Todd knew how exactly they charged, could eyeball what he had and guesstimate before we got there. So, Carson sent out his speciality clean out crew, Ross and Christiaan. Before you know it, that baby blue dump truck was hitting the streets once again. This time headed right for the streets of good ole Kennesaw.

Ross and Christiaan arrived at the the Kennesaw house that same day. They had an empty truck, and the mindset to get some ‘junkin’ done. These two Stand Up Guys weren’t messing around today.

Ross backed in the driveway and walked up to the front door and rang the doorbell. Todd answered the door and took him down to the basement to show him everything. Ross took a look everything and determined his best route to take the junk. Since there was a basement door, their best bet was to take everything around the house instead of going through the house. 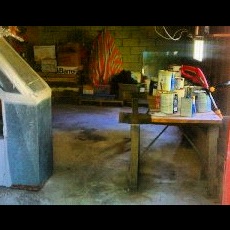 Todd let them back in his backyard as far as the truck will go until they got to a hill. Todd was trying to make things easier for the guys instead of walking all the way around the house with each piece of junk. A little courtesy and help goes a long way with us and Ross will remember that gesture.

The two guys started using an assembly line basically. Ross would place everything on the back patio while Christiaan would take everything and haul it in the truck. It wasn’t easy for Christiaan with the hill he had to climb to get to the truck, but Christiaan is a vet in the game, hard work is what he craves.

Ross could only sit back and watch for so long though. He put himself into hyper drive, this way he could get ALL the junk onto the patio before Christiaan was finished. Once Ross had all the junk out of the basement, he then helped Christiaan lug the rest of it up the hill.

When the two guys finished up with junk, they went inside the basement, did a quick look over, swept up and called it a day. They were finished in no time. That’s what pros do.

Todd headed downstairs to see everything gone just as he imagined it. They swept up the floor from where all the junk was sitting, as well. Todd could not have been happier with the outcome and now he can check off step one of his project and start on step two. Everything got squared away and nothing was left but a smile on Todd’s face! Stand Up Guys approved!