Do The Stand Up Guys Take Yard Debris?

A lot of people ask if The Stand Up Guys take yard waste, and the answer is YES. Of course we do. Anything your property can accumulate, SUG will remove it. Many people do not know this and wind up leaving piles of debris laying in their yard which can lead to citations from the county and also, the piles attract unwanted furry critters like raccoons and opossums. Nobody wants any of this. 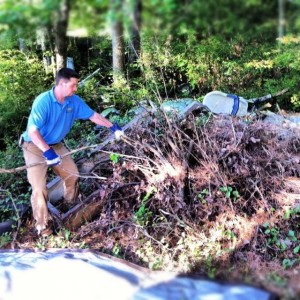 Elizabeth in Gwinnett had a similar situation with her yard debris that she had gathered over a year ago and was forced to do something about it. But Elizabeth had miscellaneous junk mixed into the pile as well, so it wasn’t just debris. Elizabeth had held off getting rid of the pile for so long because she didn’t know of anyone that could take both junk and yard debris. She procrastinated this long because she just didn’t feel like finding two separate companies, but she didn’t have a choice now.

So since Elizabeth didn’t know anybody she went with her first instinct to find someone. The first way she knew how was to search the internet. Elizabeth soon realized that she did not have to look long.

She realized that there was ONE company out there that would take care of both junk and debris, and not just one or the other. After calling a couple BIG name companies and not getting much she found the one and only Stand Up Guys Junk Removal Crew on Google and her search was over.

Elizabeth’s Call To Stand Up Guys 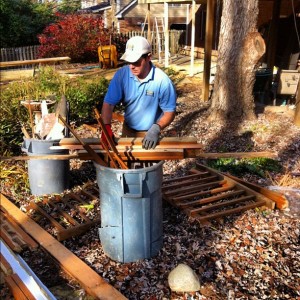 Now For The Junk

Elizabeth called into the Stand Up Guys Junk Removal Headquarters explained everything she needed gone at her Gwinnett home.

Carson, the Stand Up Guy who answered the phone, told her what she had was right up our alley. Elizabeth was relieved to hear that we could accommodate her and that our prices were cheaper than the BIG guys too, win win for her.

Carson scheduled a time for one of the Stand Up Guys Crew to come out to her Gwinnett home. Since everything was outside, Elizabeth did not even have to be there. Carson told her she could do it all over the phone if she liked. Since she had to work most weekdays this was a huge help for her.

Getting Rid Of Some Junk 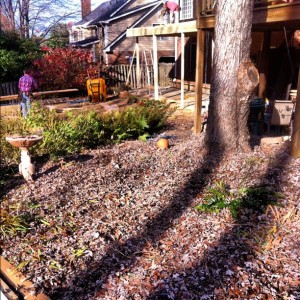 The next day The Stand Up Guys Junk Crew showed up and provided Elizabeth with a FREE estimate via cell phone.

Elizabethe was ecstatic about the price and loved that we could start right away. The guys backed up to the pile, slung the doors open, pulled back the tarp and started devouring her debris pile that had given her so much trouble.

Yard debris can be deceiving sometimes due to the amount of brush that can be squished down once in the truck. The piles look a lot bigger in the yard, but once they are in the truck, it takes up less room than you think. We squeeze large amounts in the truck at a time, then stomped it down by bouncing on it with our big ol’ boots! By doing this, we save people money because the less room it takes up, the lower the price is. And with Elizabeth, the actual price was lower than the quoted price.

Elizabeth was able to get home as we were finishing up and was overwhelmed with the job performed. She noticed everything was raked up and swept up on the driveway. Elizabeth had taken a before picture and was anxious to take the after pick. Needless to say, it looked amazing!

The SUG had completed, yet another, job well done. Elizabeth told all of her Gwinnett tennis teammates and the word quickly spread. She is still a customer to this day and is apart of the Stand Up Guys Gold Member group. Call us today and let us make your life a little more stress-free.