Yesterday the Stand Up Guys did a junk hauling job for a new customer of ours named Jenny. Next is the story along with the chain of events that lead Jenny to the Stand Up Guys. It’s a story of trust, love, betrayal and then finally a hero. We hope that you enjoy the read. All names and identities have been changed for the sake of the customers. 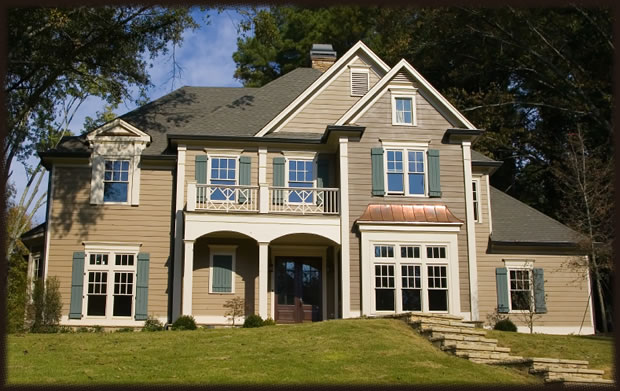 Everything started out wonderfully for Jenny when she first bought her new home in the Virginia Highlands area. She had a good job, a wonderful boyfriend and all in all things were looking up. The sky was the limit for Jenny, her new home and life.

For the first couple of years things went great. Jenny and her then boyfriend Caleb got married and settled down together. Caleb had a fantastic job as a tech consultant at a huge firm in downtown Atlanta, while Jenny was going strong as a school teacher at one of the bigger high schools in the Cobb County area.

Things got a little rough though around the 4th year of Jenny owning her home. Caleb lost his job as a consultant due to downsizing in his company. At the time of his lay off, Caleb was easily paying for more than half of the mortgage on the Virginia Highlands home. So naturally, they were in quite the pinch money wise.

What Jenny Decided To Do

Jenny had to come up with a solution and she needed to come up with it fast because if she waited too long, at the rate things were going she was going to lose the house. This house meant the world to Jenny, the last thing she could fathom was losing it.

Since Jenny had the basement re-finished when she first moved in a few years ago, she figured she could put that to use and help her own cause. Jenny decided she was going to rent out the entire basement to someone that needed it. Hopefully with the money from the renter, she could easily pay the rest of the mortgage on a monthly basis with no problem.

Jenny quickly put out some ads trying to find someone to occupy the empty basement. Within two weeks she found what she thought was the perfect roommate. Her name was Cindy, she had two kids that were going to be staying as well. Cindy was recently divorced so she was happy to have a place to stay, and was more than happy to pay the rent.

Jenny Began To Have Issues

Cindy and Jenny became fast friends. They had a ton in common and soon began to spend a lot of time together. Meanwhile Caleb was out prospecting for new work, and things were looking good. Until Cindy decided to go rouge that is.

After only living at the Virginia Highlands home for about six months, Cindy and her kids just disappeared. While she was 2 months back on rent to boot. Luckily Caleb had just landed a new job, that actually paid better than the last. If it wasn’t for the new job, Caleb and Jenny would have been up a creek with out a paddle.

Jenny was upset that Cindy betrayed her trust and their friendship. She was mystified by the fact that Cindy would just up and leave without saying anything. Sometime you think you know somebody, but come to find out you were completely wrong.

Jenny Left With All This Junk 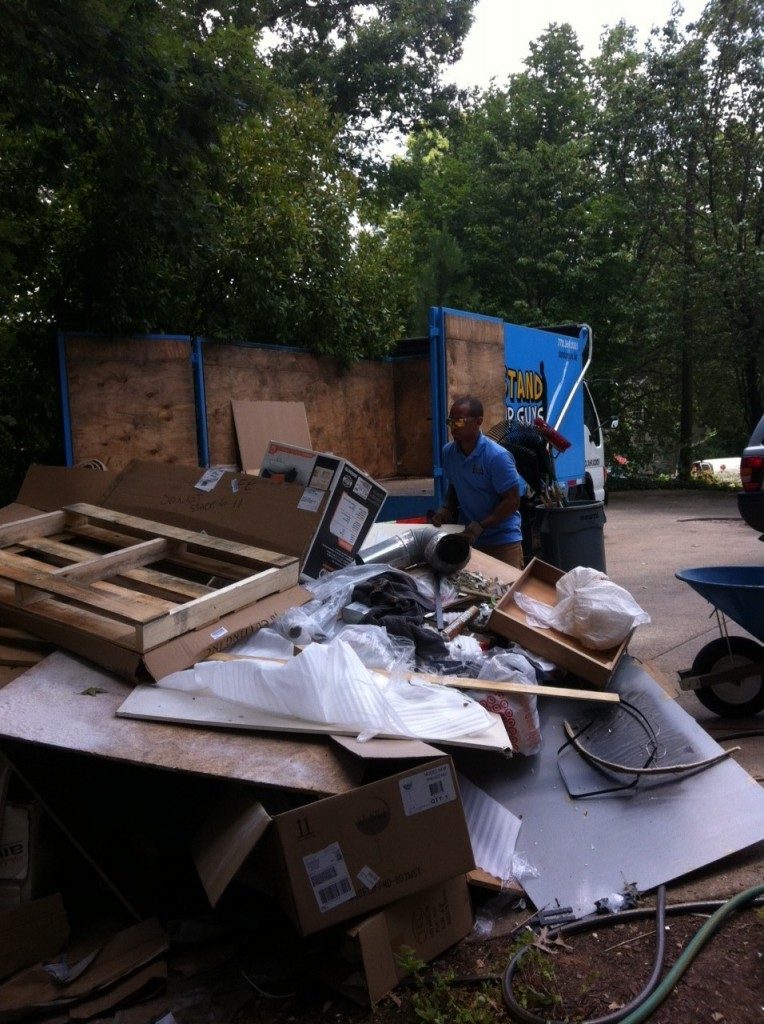 Well Cindy not only left without saying anything, or without paying her last few months in rent, she also left behind piles and piles of junk. Now that Cindy was gone Jenny was stuck with all this junk and had no idea what she was going to do about it. She was reluctant to get rid of it all at first because she was thinking that Cindy would come back to her senses and come back to at least apologize and get her belongings.

A few months went by and Jenny never heard form ole Cindy, so she decided it was time to move on. First she had to clean out all of Cindy’s stuff, and then she could have her old basement back to herself. Jenny didn’t know how she was going to get rid of it all though, she had never hired a junk hauling company before. Jenny new the perfect person to call though. One of Jenny’s best friends Wendy, who lived down the street, always had the best of advice for her, so that was the first call she made.

Jenny explained to Wendy her little issue and asked for her advice. Wendy didn’t even hesitate, because she knew the perfect solution. She told Jenny that her only call needed to be to the wonderful guys at Stand Up Guys Junk Removal. Wendy had used us first had when she had to get rid of some junk at her home. You can read all about Wendy’s experience her, ‘Junk Furniture Adventure in Virginia Highlands.’ 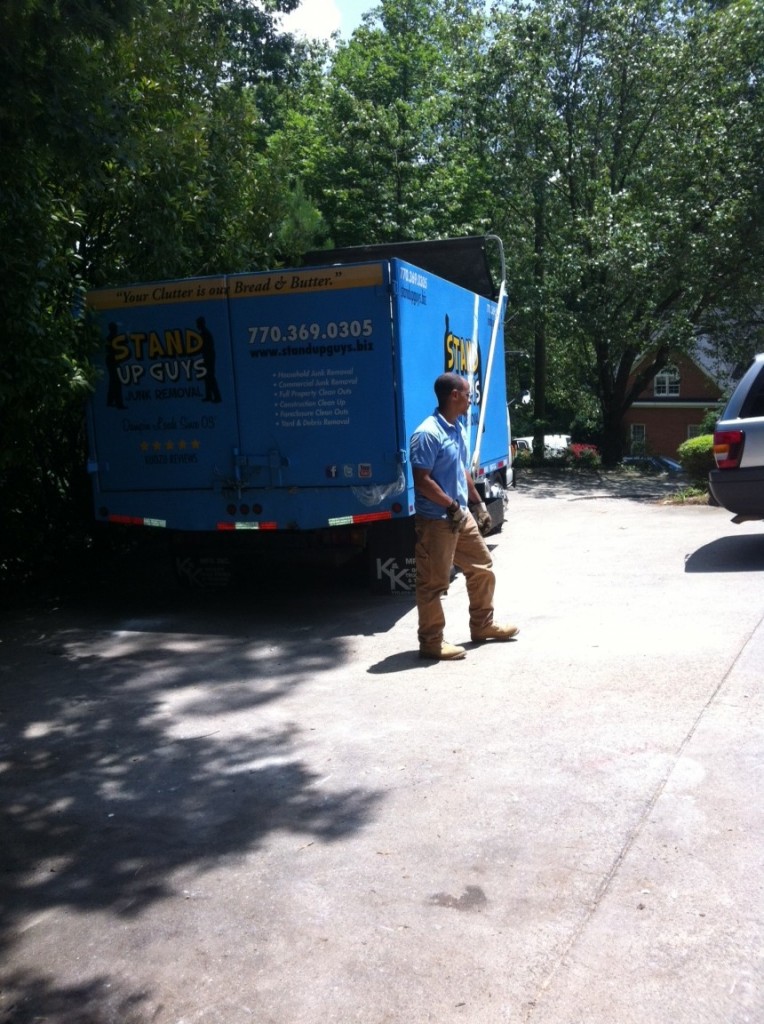 Jenny called the Stand Up Guys on the phone that very same day, and Casey (who answered her call), told her that they could have someone out the next day. Jenny was already impressed with the professionalism and prompt response from the Stand Up Guys. She new Wendy would never steer her wrong.

The Stand Up Guys showed up right on time the very next morning. They were clean cut, professional, uniformed and more importantly ready to roll. Jenny was very pleased with the gentleman that showed up right way.  She showed the guys all the junk and debris that was in the basement that she wanted gone and Carson (the Stand Up Guy) told her it wouldn’t be a problem and that they would have it out of her hair in no time. This was a breath of fresh air for Jenny.

The two Stand Up Guys on site took turns taking everything from the basement and up to the driveway. They stacked it all on the driveway before junkin’ it into the truck so that Jenny could go through it all. She figured there were a few items down there that she was going to want to hold on to. Once she was done with that, the guys chucked everything else in the truck.

Within 30 mins the guys had loaded up all the junk from the basement into the truck. Jenny finally had her old basement back!

Even though it was rough when Caleb lost his job, then Cindy split, the couple was able to get through everything. Now Jenny and Caleb’s lives were back to the way they used to be and everyone was happy.