Junk Mess In The Lawn Of Atlanta Home

Yesterday Kendra, a new potential customer out of Atlanta called into the Stand Up Guys Junk Removal Headquarters with a simple question. Kendra was just looking for information about getting all the junk and debris cleaned out of her driveway and lawn.

Kendra was basically just calling for information because she wasn’t even sure if there was a company out there that would do this kind of clean up. She was under the assumption that her only option was to have a dumpster put in her lawn for HER to fill up.

Well Kendra made the right call. We were excited to explain to her exactly what we do and exactly how we could in fact help her. It was nice to listen to the relief in Kendra’s voice as we explained to her that we could send a crew out to clean up everything and haul it all away for her. 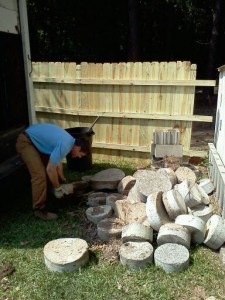 Kendra told us that her husband John and her started doing some landscape work in the backyard a week or so ago. The problem was that the two of them started the project a little prematurely, they started it without having any idea how they were going to get rid of the debris created from the landscape work.

The two of them tore up all the cement steps that were circling their backyard patio. They also trimmed back numerous branches from some of their large trees deep off in the backyard. The couple even dragged everything to the side of the house and stacked it all in piles.

Kendra and John already did all the hard work, now they just had to find someone to get all this excess debris out of their Atlanta home lawn. Like I said before, Kendra made the right call. There is nobody better to get rid of all your junk and debris than the Stand Up Guys, especially if you live in Atlanta.

Cleaning Up The Junk Mess

We quickly scheduled a time with Kendra to have a Stand Up Guys Crew come out and offer her a free, no obligation estimate on getting rid of all the junk in the yard of her Atlanta home. We told her that we could come out as soon as the very next day. She was pumped. 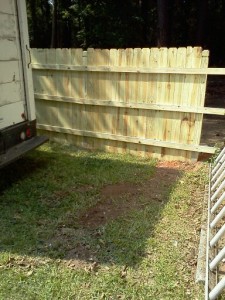 We sent out two of our best to take care of this one, Christiaan and Clark. The two Stand Up Guys showed up at Kendra’s Atlanta home the next day, bright and early in the morning ready to help.

Clark and Kendra walked to the side of the house so that he could take a look at everything. Clark examined the pile of junk for a minute or two and gave Kendra the best possible price he could. Kendra loved the price and gave the guys the thumbs up to get it done. Since the two Stand Up Guys came prepared and ready to work, they went right ahead and got started.

Clark and Christiaan strapped up their boots, tightened their belts & put on their working caps, it was time to get down to business and make this junk disappear. Clark backed the truck up right next to the pile of junk and debris as Christiaan help guide him. Always remember folks, safety first.

After the junk truck was strategically place next to the pile in the lawn, the two Stand Up Guys started loading the junk up. They attacked the pile of cement walk stones first. We have a motto here at Stand Up Guys we like to go by. We call it ‘eating the frog.’ Eating the frog refers to tackling the hardest part of a job first to get it out of the way, and that is exactly what Christiaan and Clark did with the stone.

They knew that the rest of the clean up would be easy breezy japanezy after they got the stones out of the way. Clark, like always, used his massive biceps and shoulders to lift the heavy stone off the Atlanta home lawn and into the truck. At the same time Christiaan was taking the stones and strategically placing them into the truck in order to preserve space. 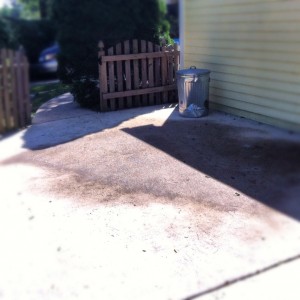 Once the two studs had all the stone heaved into the back up the junk truck, then stacked neatly in the back, they began to rake up all the small particles left behind by the stone. Clark always makes sure that each pile he removes looks spotless before he moves onto the next one.

After they cleaned that entire area perfectly, Clark and his sidekick moved to the debris on the other half of the lawn. They didn’t bother pulling the truck up to this pile because none of it was very heavy. So in return, it wasn’t hard to drag across the lawn. We would like to drive on our customers lawns as minimally as possible.

Christiaan began breaking up the debris and cut down tree branches into manageable pieces to fit neatly in the truck as well. Every time Christiaan would finish cutting up a branch, Clark would drag it to the truck and place it inside the dump bed.

The two Stand Up Guys repeated that process enough times til the job was complete. Once again the Stand Up Guys showed why they are the most efficient, and smartest working junk removal company there is.

Clark went to the front door to get Kendra to give her the good news. Her lawn was clean!

When she walked outside to take a look at everything her jaw dropped. Kendra was so excited to have everything removed and her old lawn back. She could not believe how fast the two guys knocked this one out. Knocked it out of the park that is.

Kendra wound up calling into the office 30 minutes after Clark and Christiaan left just to express to us how happy she really was. This isn’t uncommon with Clark, customers just love to call in and talk about how much they love him and his hard work.

We told Kendra that this kind of satisfaction is what we strive for with every customer, so we were very happy that she was pleased with the whole thing. Hopefully we will see Kendra, her husband, and her beautiful Atlanta home again soon!