Saturday The Stand Up Guys arrived at our third job of the day around 1pm, it was at least 103 degrees by this time. The house of our customer was located inside Sandy Springs, one of our favorite places to work. There is just something about Sandy Springs that makes you feel welcomed when you are there. 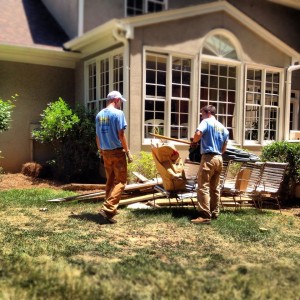 We were there to pick up a pile of junk that was in the backyard of the home. This was for a customer that has used our awesome services on many occasions. Her name is Mindy.

Mindy started using the Stand Up Guys Junk Removal Crew when she first moved here to the Atlanta area three years ago. When Mindy moved here from Chicago she realized quickly how much of the stuff she brought down here with her during the move she didn’t want. She also realized how much of it was junk.

At the time Mindy didn’t know anybody, or any company that could help her with getting rid of all her leftover moving junk. Luckily one of our famous Stand Up Guys Junk Truckswas filling up on fuel at the same time that Mindy was at the local gas station in Sandy Springs. She approached the gentlemen in the truck that day and the rest is history. 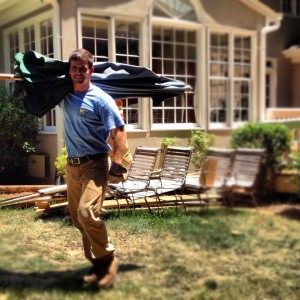 Mindy has used the Stand Up Guys for many of her in-home projects over the years, and today was just another shining example of that. Mindy hired a small contractor to fix up the running boards on her old deck that were broken or rotted. The contractor replaced almost every single one of the running boards on the old deck and he even fixed up a few of the handle rails for her as well.

The contractor just piled all the old junk wood in the back of the house next to the deck at Mindy’s request. She wanted to make sure that everything was in a nice neat pile for the Stand Up Guys. Even though she knows that that isn’t necessary, she still likes to make our job easier when she can. That is just one of the reasons that Mindy is one of our fav’s.

Like I said earlier, when we arrived at the Sandy Springs home it was pushing 103 degrees, and no that ‘s not sarcasm. It was one of the hottest days in Metro Atlanta history and the Stand Up Guys Crew was definitely feeling it. The heat wasn’t really slowing us down much though, but it was sure kickin’ up our water intake. 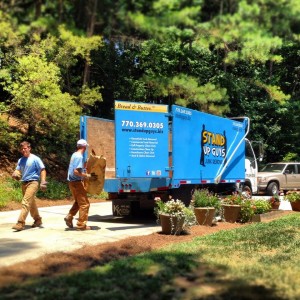 Loadin’ Up The Truck

There wasn’t much shade at this job either, so when we pulled up to the pile we knew that we were going to have to get at it quick. Or we might have just melted then and there. Pretty sure that was why we were the only junk removal company out on the road that day, seemed like most folks were staying inside where it was cool. Not the Stand Up Guys though, we work through it all.

Clark and Jason hopped out of the truck and got right to work, they were not about to waste a moment in that hot sun. Clark, like always, grabbed all the heavy junk first and lugged it to the truck. He likes to get that out of the way first and since he’s usually the biggest and strongest guy on the job site, he takes the burdon of the heavier items and puts it on his shoulders.

Now Jason isn’t no slouch himself. He might not have the muscle mass that Clark does (I mean nobody is as big as Clark aka ‘the Hulk’), but Jason can sure get stuff done fast, that’s just one of the reasons that we call him ‘Speedy McJason Sauce,‘ he’s always the quickest guy out there. Like he likes to say, “I get junk done.” 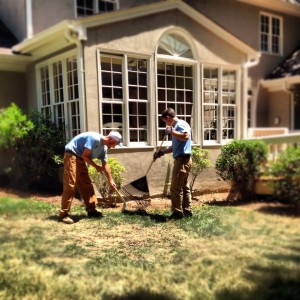 Jason grabbed all the necessary tools out of the truck and started to arrange the pile so that he could pick up the maximum amount that he could. Since Jason is a little bit smaller than some of the other Stand Up Guys, he learned how to utilize his brain instead of brawn. He always works smarter, not harder.

Jason and Clark huffed and puffed for a good 45 mins before they had the whole pile cleaned, cleared and loaded into the back of the dump truck. In that 45 minutes they probably went through 2 gallons of water easily, 2 gallons each that is.

Jason was in the back of the junk truck for a majority at the end of the job to make sure that everything was going to fit. Sometimes in the junk game you have to stack everything just right in order for it all to fit in. If it doesn’t fit then your really up a creek, so it’s imperative that it all fits in. When Jason’s on the job that’s never a problem though, so we had nothing to worry about.

When the guys finished up, they swept up all the remaining debris as well. They didn’t want any hidden nails or anything to come up later and cause Mindy problems. Mindy was happy with the job as always, well actually she was ecstatic. She has never been let down by our crews and she never will. We take care of all our customers to the best of our abilities.