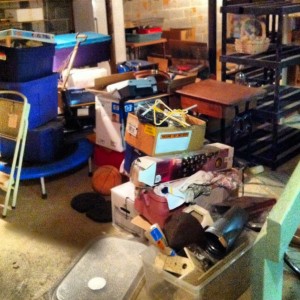 First off Brian hired a contractor about 3 weeks ago to redo both his master closet and bath. The contractor was taking longer than expected, and he was making a pretty big mess in the garage. Brian was under the impression that the contractor was going to dispose of all the excess construction debris himself. Brian was wrong.

The contractor told Brian that the debris was going to cost him around $500 extra to get rid of, because the contractor was going to have to take it all to the dump one pick up truck at a time. Brian thought that was way too much, hence the reason he called the Stand Up Guys.

When Brian told Casey about what was in the garage, he assured Brian that it would be much less for them to get rid of it then it would be for him to pay the contractor. So Brian was ready to roll on that, except he had one more issue as well.

Brian also had some relatives coming in town the following month. He has a spare bedroom for his relatives to stay in, but he’s been basically using it as a glorified storage room for the past few years. When Brian went in there and started looking around, he realized that most of it was junk. Once again, Casey told him they could take care of all that as well.

Clark and Ross showed up at Brian’s home in East Cobb the following Monday ready to rock and roll. Brian met with Ross at the front door and walked him through the house and showed him all the junk and debris in both the garage and in the spare bedroom.

Ross gathered everything in his head and gave Brian the best possible price on all the removal he could. Brian was ecstatic about the price, and told the guys to go right ahead and do their thing.

First the guys wanted to tackle what was in the garage. This way once all the junk from the garage was out of the way, they could easily get from the spare bedroom to the truck. Since the easiest way was through the garage. So Clark went ahead and backed the truck right up to the garage.

Ross and Clark strapped up their boots, put on their junk removal gloves and got to work. Ross stayed in the back of the truck in the beginning while Clark handed him all the construction debris from the garage. This way they could stack everything neatly in the truck and in the end fit more. The more just the guys can fit in the truck, the more money that Brian can save in the end.

Once the guys finished up in the garage, they moved towards the spare bedroom. The bottom of the stairs leading directly to the bedroom were right by the garage. So the access was easy, much easier now that the construction debris in the garage was gone as well.

Clark and Ross huffed and puffed up and down the stairs. Bringing as much junk with them on every trip as they could. The less trips they have to take the easier it would all be in the end. Before they knew it though, they were all done. The spare bedroom was spotless and all the junk was now loaded into the truck.

Brian (like all our customers) was so pleased. He was happy to have all the junk gone, and he was surprised on how fast they guys got it down and how easy the process was. He made one phone call to the Stand Up Guys and his job was done. Another good day for the Stand Up Guys Crew!