Connie, a new customers of Stand Up Guys Junk Removal called in a few days ago looking for help. Connie had never used a junk removal company before so she was a little in the dark about how everything worked. Her first move was a smart one (which was calling the Stand Up Guys) so she was off to a pretty good start. Here’s her story…

Connie lives by herself in a two bedroom apartment on the 11th floor of a high rise building in downtown Atlanta right in the Ansley Park area. Over the years, her spare bedroom has turned into her  glorified “junk room” so to speak. Anything that does not work, is too old, or stuff she does not like anymore, all gets tossed in this room.

Connie just didn’t know what to do with all this junk. Eventually the pile got to the point where it needed to be hauled off. Connie lives by herself and cant haul everything out of her apartment, to the elevator, out the building and into her car all by herself. At the time Connie did not know our type of service even existed until she saw the bright blue shinny trucks on the road one Saturday from when we were doing another job in the Ansley Park area. Extremely excited, she wrote down the number on the truck and saved it. 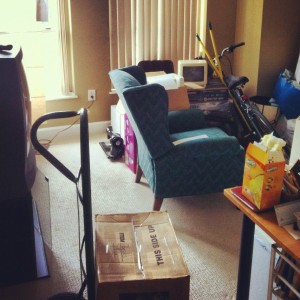 “Stand Up Guys Junk Removal, this is Carson, how can I help you?” Connie started telling Carson about all the junk she has and how it got there. Connie was unsure about how much a service like this cost, what all we would actually take, etc. Mainly because she has never used anything like this before.

So, Carson explained to her that we could send out two uniformed Stand Up Guys professionals to her condo to offer her a free estimate. He also told her that because we always show up prepared, that if she liked the price that was presented to her we could go ahead and take care of all the junk removal right then and there.

Carson got her information and knew it was going to take a little time since she lived in a highrise, so he went ahead and blocked off two hours for her. Connie LOVED the way we do business and could not wait to meet us. 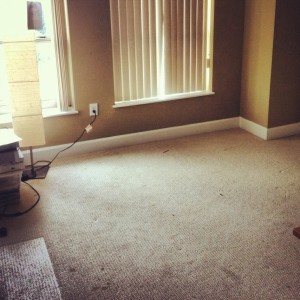 Ross and John (the new guy) headed out early the following Wednesday to Connie’s Ansley Park home, Connie said she’s an early bird, so we booked her for the early slot we have. While on the way, Ross called Connie just to let her know his estimated time of arrival so she could get everything finalized and ready to take.

Ross met Connie downstairs at the front desk, then followed her up to her apartment. Ross saw the junk, gave her the price, she agreed and the Stand Up Guys were at it again…doing what they do best, hauling junk!

The two Stand Up Guys started removing everything out of the apartment first, so Connie could start arranging the room again. Ross would put everything from inside the room outside her door and John would then take all that to the elevator. This way, when they come back up the elevator, all the junk would right there on the 11th floor (“work smarter not harder” said John). After a couple trips up and down the elevator, all the junk was finally stacked in the truck.

Ross realized that all the junk didn’t fill up the truck as much as he originally anticipated in his estimate before the job started. Ross told Connie this and was able to give her an even better price than the original quote. She was thrilled at both the price and professionalism of The Blue Crew. Connie was left with nothing but an empty “junk room” for her to start all over again. Another customer left happy…Stand Up Guys approved!