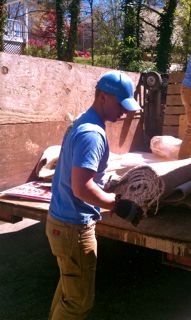 It is actually not as much as it seems though, this particular neighborhood just finished with a weekend long “Neighborhood Garage Sale Bonanza”. They had people in and out the whole weekend, buying, trading and giving away things from each others homes. They made this more than just a “Group Garage Sale”, it was more like a party, with people everywhere browsing and mingling. A few of the guys from our crew were actually out there during the weekend, buying some things, and browsing around.

Once the weekend bonanza was finished and everybody got rid of what they could there was a substantial amount of left over junk. The Stand Up Guys Junk Removal Crew drove from house to house, collecting and sorting through all the left over junk. We sorted through the junk and put everything that had donation potential to the side, for later. Just because there were some people over the weekend that didn’t buy some of the items, there was still a large amount of it that was useful. We wound up donating over half of the everything left over from the weekend.

The rest of the junk we took as normal, just like the Stand Up Guys Junk Removal Crew do. We were able to recycle some of the actual “Junk” too, so that was a plus. The rest of the junk after all the sorting, recycling, and donating was chucked into the landfill. In the pictures here, this is some of the Junk that was left over at the neighborhood pool.

Stand Up Guys Junk Removal Crew are here to help in our community, whether it is one house, or a whole neighborhood. If you are having a garage sale soon, don’t be shy to give us a call to take care of everything left over. We can always find a good home for almost every item. 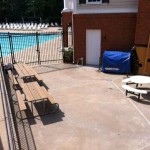 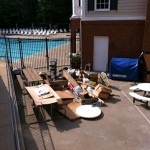