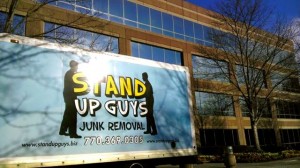 For the last two days, the Stand Up Guys Junk Removal Crew have had their hands full. We have been clearing out all the old, leftover junk from an office complex in Atlanta. There was so much junk, that we couldn’t even get it all done in one day, and you all know how much the Stand Up Guys can get done in a day.

The company that was renting out the space in the office complex in Atlanta, had been there for well over 10 years. So as you can imagine, they had a TON of junk. The company was packing up and moving out because they were upgrading to a bigger complex near Marietta. They said they loved being in the city, but the cost of a complex as big as they needed was too much in the city. They are a fast growing business, so they need their space.

Well, basically when this company left, they didn’t want to take everything with them, and what they didn’t take, was a whole lotta junk. There were well over 25 rooms that they owned in this complex, and yes, every single room had at least a little bit of junk, and some of them had a lot. So we had our hands full.

Most of the junk was just your typical office stuff, like cubicles, printers, old computers, desks, and chairs, and what not. They were even getting rid of a lot of paintings, and we weren’t just going to trash those at all. No, we donated every single painting to the near by art center, and yes, they were ecstatic about it. We were even able to donate a lot of the chairs as well, because some of them were still in good condition.

After we were done donating everything we could from the office, we got down and dirty, and got to the real work, Junk’n. The office complex was on a busy street in downtown Atlanta, so we couldn’t just pull right up to the door. We had to bring the “big blue junk truck” into the loading area, in the parking garage. This alone was a hassle, because the truck is so big, it doesn’t fit into small places like parking garages very easily. 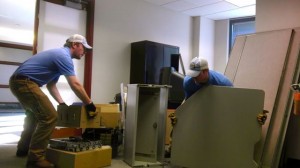 We were able to get the truck relatively close to the loading area, near the freight elevator. So all in all, we were ok. We brought with us some big, industrial sized four-wheel dolly’s. We loaded all the dolly’s up with as much junk as we could, and wheeled them all to the elevator at once. This way, we took the least amount of trips up and down the freight elevator as possible. There are a ton of people trying to use those things during the day, so it’s not fun to try to share an elevator with people, when you are filling the entire thing with junk.

Well, it only took two days of loading, breaking down, hauling, lugging, and going up and down the elevator, but we finished. Like always, we finished with happy customers as well. So all in all, this Atlanta office junk clean out went pretty darn well.