Roger owns a house in Woodstock, Ga off the Towne Lake exit on hwy 575. He has been renting this house out to Bill for the last two years. Bill works for a fencing company and does a lot of ‘do it yourself‘ projects around the house. He had recently taken down the entire fence that surrounded the yard and started to put up a whole new fence.

As his project progressed, he started piling up all the excess wood, wood shavings, old posts and miscellaneous junk around the yard into one big pile. As the new fence was being built at the Towne Lake home, all the extra wood left behind was piled onto the same mound of junk. Needless to say, the pile began to get rather large. After it was all finished up, the pile is what you see here.

Roger’s situation did not start until a few weeks after the old fencing was piled up. Bill broke his lease and left in the middle of the night, leaving all the debris in the backyard behind. Since Bill was no where to be found, Roger was left to clean up the mess.

The Call-in and Arrival to Job Site 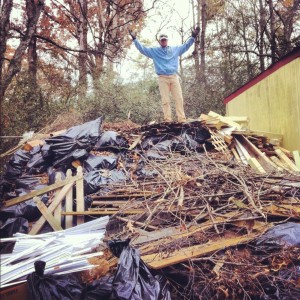 Roger did not know what to do next. He was left with 20,000 lbs of yard waste and old fencing to deal with. There was no possible way Roger could even imagine doing this himself with his pick up truck.

He started researching on the internet what kind of companies handled this type of job and came across junk removal. Immediately he knew this industry was what he needed. Junk removal companies were all over the web and he needed reliable, insured and hardworking guys to get this done. Roger needed it done professionally and quick because he needs to find another tenant.

Roger came across the Stand Up Guys Junk Removal Crew and talked to Ryan over the phone for about 30 minutes explaining his situation and the steps he needed to take next. Ryan got all his information and set up a time that Roger had requested.

Carson and John showed up a few days later to take on the old fencing mother load. It was extremely bigger than both guys had imagined, but no job is too large for these two. Carson met with Roger out back and said it might take a day and a half to complete. Roger had no problem, he agreed with the price and the guys were getting started. 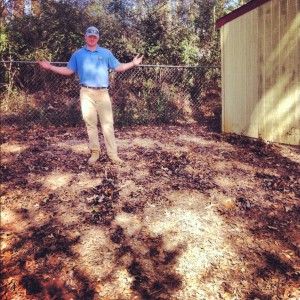 The guys were able to back into the backyard and start will all the bags of wood first to go into the first load. There were over 100 construction bags filled that was the entire first load.

The second load consisted of the random wood panels from the actual fencing and some yard debris that was scattered around the yard. Underneath the massive mound was about 45 wooden gates. We soon realized that this was not all from the same house because there was no way 45 gate doors were for one house.

It was obvious now that Bill had been taking wood from jobs and not disposing of them properly and instead, throwing them in to the pile in his back yard. This irritated Roger to the core. Roger now knew this may have been a premeditated plan from the beginning.

Nevertheless, Carson reassured Roger that this was nothing to worry about. 8 hours later, the job was completed in one day and Roger had his backyard back.

Carson and John had made that backyard clean enough to eat on! Roger was so relieved to have this off of this shoulders. He took a few of our biz cards and said he would recommend us to anyone who came his way.

Roger could now move on to fixing up the rest of the house to put back on the market. Another customer left happy and with a smile on his face. Stand Up Guys approved!