Last Monday we got a call into our office (aka The Headquarters), from a new potential customer named William. William found us online, and saw that our company specializes in the art of backyard playset removal.

William said he lived in Marietta, and has owned his home there for more than 30 years. So naturally, he wanted to find a company that was local in the Marietta area, and not a large inflated chain. Well, did he ever! The Stand Up Guys were founded, and began our dominance in the world of “junk removal” right in the heart of Marietta. Our roots run deep in here, and we love the people of Marietta, almost as much as they love us.

We told William that we were perfect for him, and we could come out any time that he liked. He asked that we come out that Saturday, and possibly help him. Of course we told him “no problemo.” 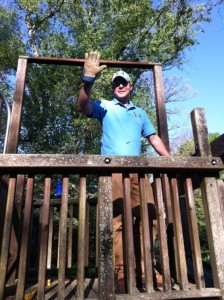 We arrived at Williams nice Marietta home early on Saturday morning. The Stand Up Guys sent out two of their very best, the one and only Carson, and his side kick Ross. These two Stand Up Guys “big wigs” have taken down more playsets than you can count, so we knew they were the ones for the job.

Carson and Ross met William at his front door early that Saturday morning, and he was ecstatic to see them. William had been looking forward to getting this old junk playset out of his life for quite some time, and today was the day.

Right away he showed the guys the monster playset, and what was on the plate for them today. William was a little worried that the playset would be too big for someone to tear down without big time heavy machinery, but Carson reassured William right off the bat that this is what we do, and that it wouldn’t be a problem at all.

William was so relieved to know that the  Stand Up Guys could take care of his playset removal, and he said “let’s get it done than boys,” and Carson and Ross got to work.

The Story Behind The Playset 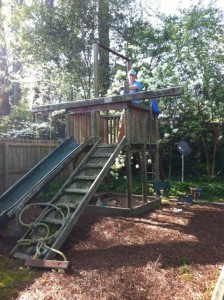 As the guys were getting all the tools out of the truck, and prepping the job site for the demolition of the playset, William brought them out some lemonade, which was really cool of him.

William went on to tell the guys about the playset, and why he was finally getting rid of it.

About 28 years ago, when William had only had the Marietta house a few years, his then toddler children Rachel and Tommy were begging him for a playground in the backyard. William said he fought them on it for a few months, but eventually he caved.

“Back then”, William said, “you couldn’t just go to the local Home Depot and buy a playset, it was much more complicated than that“.

So instead, William had to buy the plans, and the material from the local hardware store. Then he had to build the playset himself. The children were too young to help, and his wife was busy with the kids, and her work (she was a school teacher at the local high school), so William buckled down and did all the work himself. 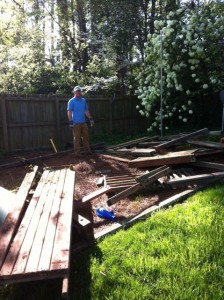 Taking Down The Monster

William said that the playset cost him a pretty penny, and hours upon hours of hard labor, but that it was all worth it when his kids were finally able to play on it. He said that they were so excited to have their own personal playground in the backyard, that they would play for hours and hours until he had to force them to come back inside. They would even bring the neighborhood kids from down the street to come play on it as well.

Williams playground creation was the hit of the neighborhood.

But that was then though, and this is now. Williams kids are all grown up now, and they are starting to have kids of their own. William is now a Grandpa for the first time. He told us the reason he was finally retiring the old playset was because it’s gotten too old, and he feels it might be too dangerous for his grandkids to play on.

So in the place of the old playset, William is purchasing a new one, that will be a little safer, sleeker, and more modern. The new playset will be great for the grandkids, and hopefully it will help make as many lasting memories as the last one did. 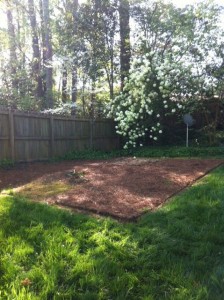 With all that said, Carson and Ross still had a job to do. First they took out the sawzall and cut off all the external parts, i.e. the railings, the slide, and a few other odds and ends.

Next the guys took the sledge and knocked out all the beams that were supporting the deck area of the playset. Once those bad boys were out, the entire playset came crashing to the ground.

Carson and Ross then carefully cut everything into manageable, safe pieces, and started hauling it to the truck. William was really cool about it all too, he even let the guys pull up to the side of the house, this way the walk to the truck wasn’t bad at all for the guys. Sometimes the walk to the truck alone can determine whether we get back home in time for supper or not. It makes an enormous deal on time, so when customers help us out, we are much appreciative.

All in all, the job wasn’t too bad. Carson and Ross had the entire playset down, and hauled to the truck within about 2 hours. William was extremely impressed, but also a little sad to watch it go. At the same time though, he was happy, because now that the old playset is gone, it leaves room for the new playset, and new memories for the next generation.

This was a heartwarming story, and it was a pleasure to help William along the way. We hope all the best to William and his family, and we hope the grandkids enjoy the new playground.