Light Demo & Removal With The Stand Up Guys Crew 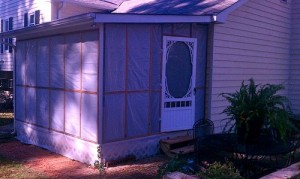 Today we had ourselves a little bit of a project, and it was quite a bit more than just your typical junk removal job. We had a contractor contact us last week. He proceeded to tell us about how he was going to build an addition onto one of his customers houses in Woodstock. The only problem was, where they wanted the addition, is exactly where their porch was. Of course, being busy like he is, this particular contractor did not have the time to get rid of this porch himself, but he needed it demolished, and he needed it quick.

Then this is where the Stand Up Guys Junk Removal Crew come in. We have worked for this particular contractor many times, so he knows the magnitude of what we can accomplish, and he knew very well that this porch would be no problem for our crew. In fact it would be as easy as pie, because we are the experts and all of course.

So we scheduled him in for this week, and set aside an entire half day to demo the porch for him.

We got out to the house in Woodstock around 1pm Friday, it was quite a bit chilli, but either way we were revved and ready to go. We had all the necessary tools, an empty truck, and most importantly, the grey matter between our ears.

We proceeded to take down the screened in porch as follows.

As you can tell from the pictures, we were there pretty late. We didn’t want to burden our customers with a half torn porch laying in their yard over night. So we huffed and we puffed until about 7pm that night and finished it all. That’s just the Stand Up way…