Last Tuesday night during a torrential downpour in Metro Atlanta, Bonnie can home to her retaining wall slowly collapsing in her backyard. Crazed by the situation, she called her husband, Brandon, to figure out all their options. They had to get rid of these old railroad ties immediately so that they could start building a new retaining wall.

Bonnie’s husband called a few of his friends to ask if they were ever in a position like this, because he only works off referrals, and if so, what did they do? After talking with a few buds, he called David, a friend of his who’s opinion he strongly valued. David said he used The Stand Up Guys twice in the past for fallen trees in his backyard and loved the price, efficiency and customer service! In a matter of minutes, Brandon looked up The Stand Up Guys online and knew they were making the right decision. 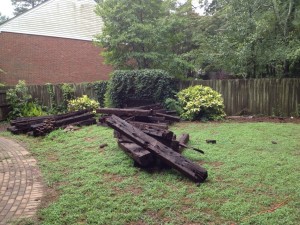 The following morning, The Stand Up Crew got a call from Bonnie explaining her situation. Casey, who answered the phone, reassured her that they were the perfect fit for her little problem at her Peachtree Corners home. He explained to her that The Stand Up Guys have done our fair share of railroad tie jobs and that this would be no different.

Bonnie was relieved to hear of the professionalism and courtesy of Casey. She felt she made the right decision so she went ahead and scheduled for the next day. In the meantime, Casey gathered up his best to show Bonnie and Brandon that we are the ONLY choice in the junk removal game. Carson, Clark and Ross were on their way to dazzle Bonnie the very next morning. 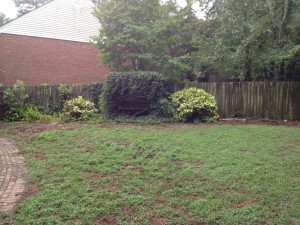 The Crew pulled up right on time at the Peachtree Corners home and Carson quickly rang the doorbell to meet Bonnie. He introduced himself and said “let’s go see what cant wait to get hurled into the truck.” They went around back and saw that some of the railroad ties were in a pile. It seemed Brandon had done some work to help us out, having the railroad ties in a pile is sometime half the job itself. It just makes our job a whole lot easier.

Carson walked around the pile and the other scattered ties, and quickly wrote up an estimate and explained to Bonnie how we would charge for this job. She was thrilled with the price. The deal was signed and the crew began to do what they do best.

Most of the ties were extremely heavy, so Ross and Carson carried the big pieces to the truck while Clark switched to “beastmode” again and started to gather the smaller items and lugging them with the wheelbarrow. The weather was perfect for the long haul to the truck, so the guys were in and out in the blink of an eye. The truck was packed and tarp was down and the Stand Up Guys stamp of approval was finished. Carson informed Bonnie that they had completed the job and the everything was ready to go.

Bonnie opened the door, and could not believe that Carson was telling her, her junk had vanished! She was so thrilled with quickness and professionalism of the Blue Crew, she said she would turn to The Stand Up Guys for any of her furture junk removal needs. Another frazzled customer calmed by the service of Stand Up Guys Junk Removal. Stand Up Guys approved!