Last Wednesday we got a call from our old friend Contractor Joe about a job he was doing in Marietta. Joe calls upon the Stand Up Guys to help him remove the remodeling and construction debris from all of his jobs around town. You can read about the last encounter we had with Contractor Joe at the job we helped him out in Roswell, removing old decking boards.

This time Contractor Joe was calling us about something inside of a customers house though (he usually deals with exterior work). He was hired to remodel a basement in Marietta last month. His customers were so excited and happy about the work that Joe did on the basement that they asked him to remodel their upstairs master bath as well.

The bathroom that Contractor Joe’s customers wanted him to remodel was extremely old. It had to have been built-in the 50’s or 60’s, so he knew that he had his work cut out for him when it came to the demo. Old bathrooms are never easy to take out. 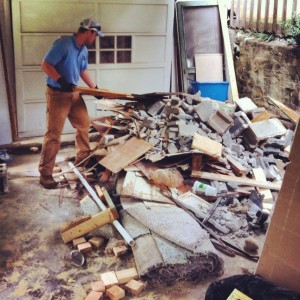 Usually Joe hires the Stand Up Guys Junk Removal Crew to take care of demo’s like that, but because of the season and the fact that work is slower than usual, Joe figured there was no reason he shouldn’t save a bit of money and do it all himself. After getting half way through and realizing how much stone, tile and grout was involved with this ancient bathroom I think he started to regret his decision just a tad.

Joe and his guys ripped out everything from the old bathroom. All the way from the floor, to the ceiling. The ripped out all the tile on the floor, drywall, the toilet, countertop, bathtub, I mean they gutted the entire thing.

Since Joe has used the Stand Up Guys many a time, he knew to just stack all the debris in a pile where it wasn’t an eyesore for the customer, but also was easy access for our trucks. Joe had his guys stack all the bathroom demo debris down behind the house in the patio behind the garage. It was a place that no one in the neighborhood could see, and it was a perfect place for the Stand Up Guys Junk Truck to pull up too. All in all a great spot for the debris.

When Joe called in last Wednesday he told us all about what he was planning on doing with the bathroom in Marietta. He also told us that he didn’t know exactly when he was going to finish, so he wanted to know if we could have our crews on ‘stand bye‘ if you will, during the week. Joe knew he would have the bathroom completely demoed by weeks end, just not exactly what day, and the last thing he wanted was for the pile to sit out there for a couple of days and upset the customers. 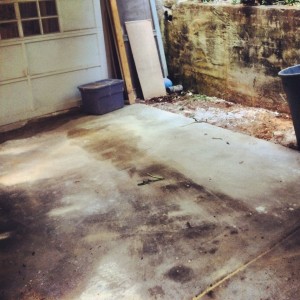 Of course we were able to oblige Joe, after all he is one of our all time favorite customers. We told him that whenever he called during the week, we would find the time to get it done asap. Well just yesterday morning we got a call into the Stand Up Guys Junk Removal Headquarters from Joe himself saying he was ready to rock and roll with the debris pile.

Ross and Carson were just finishing up a job early down in Grant Park and Casey (who answered the phone) new that he could squeeze Joe’s pick up in between the Grant Park job and the next one on the schedule. When it’s Carson and Ross out there on the truck, you know you can count on them to get the job done when needed.

So Casey put the call into Carson and sent him over to Joe’s right away. Carson was ready to roll, and Joe was so pleased to know that the pile was going to be gone that fast. I mean that’s even faster than he anticipated, and he already knows the true potential of the Stand Up Guys Crew.

Carson and Rossy Boy showed up to Contractor Joe’s customers house in Marietta almost an hour after he called into the office. The came ready to take care of everything. Carson hopped out of the truck, talked to Joe for a quick minute. They agreed on a price, and Ross backed the truck up to the pile and the two Stand Up Guys got to work.

There was a lot of rubble and stone, so Carson and Ross started by packing the stone into trash cans and carrying it over to the truck. That works much faster then taking each individual stone to the truck at a time. Time is of the essence in this business, so whatever we can do to make jobs go faster, we do. This isn’t the Stand Up Guys first rodeo, we have dealt with quite a few construction debris piles over the years, we know what we’re doing.

After they sifted through all the rubble and had it loaded up into the truck, then started getting all the drywall and carpet. Ross and Carson huffed and puffed for a good 45 mins, working as fast as they could. They didn’t want to risk being late to the next appointment.

They worked fast enough and had the job completely finished in a good amount of time. There was plenty of time left over to get to the next appointment, and Joe was so happy to have the pile gone that quickly. We love to make him look like a rock star in front of his customers. That’s probably why he keeps calling us over and over again.

Until next time, your the man Contractor Joe!