Rental Property Clean Up in Vinings

Lauren owns a bunch of properties around the Metro Atlanta & Vinings area and more often than not she is burdened with leftover junk that her renters leave behind. 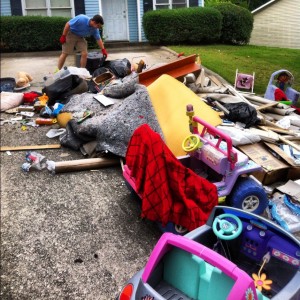 Since this was a townhome that Lauren rents out, other people share the same driveway, which puts this junk disaster in even more of a rush to get done. The last thing that Lauren needs is for her other renters to get upset that their driveway is filled with junk, and not even theirs to boot.

Lauren as been through this type of thing before. The last time this happened she used a nationwide junk removal company to come clean everything up (big mistake on her part). After their prices, poor customer service, and her overall experience she swore she would never use that company, or any large chains again.

As it turns out, when this little disaster happened in the middle of the night, Lauren began to scramble, looking for a junk company that could help her out. Luckily she came across The Stand Up Guys and decided to give them a call (best decision ever). 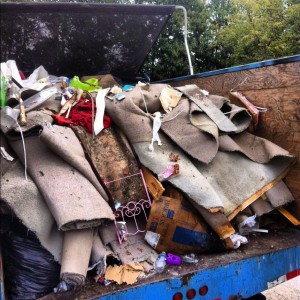 Lauren called in and was able to speak with our “main man” Casey the very next morning. She explained her entire situation and that everything was on the driveway, and that it had to go fast.

Casey understood everything and he informed her that he, personally would go give her a free estimate that same day. That way she would know exactly how much she would need to pay before hand, and not be pressured into anything, or tied into a price before hand, like she was the last time she was in this predicament.

Casey got out to Lauren’s rental home in Vinings within 2 hours of the call. He took a look at everything, called Lauren with an estimate. Lauren loved the price and wanted the Stand Up Guys to come out as soon as they could and take care of everything.

When Lauren used one of the larger junk removal chains, they scheduled a time with her three days out, even though she explained to them that it was an emergency. Since this happened the first time, Lauren just assumed that this was common place, that junk companies made you wait a few days before taking care of the removal.

Well this isn’t how the Stand Up Guys operate. Casey told Lauren that since she liked the price and this was an emergency, he would have a crew out later that same day. She was floored to say the least. The last thing she expected was for everything to go this smooth, and for her to be able to have the junk gone same day. The quicker we get it hauled away for her, the quicker she can get back on track with her property. 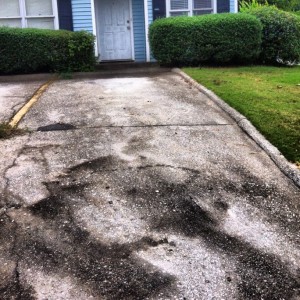 Before you could say “Stand Up Guys to the rescue” Clark and John were en route to Lauren’s property! Everything was already quoted so the guys were able to start as soon as they got out of the truck.

Most of the junk was household junk like carpet, toys, tv’s and misc items. Rain had dampened the trash and made the carpet very heavy, so Clark decided to leave that for last so everything could be weighed down underneath.

Unfortunately, they could not donate any of the items because of the the rain from the previous day. Everything went as smooth as a baby’s bottom. Lauren was able to meet the guys out there towards the end of the job and was overwhelmed with joy when she saw the finished project.

Lauren, with a smile on her face, wrote the check and received her receipt. Clark and Lauren talked for a bit, just explaining to each other about what they come across job wise, and realized that they can be business partners for a long time. She asked for a whole stack of cards and said that she would tell everyone she works with about us and that we’re at the top of her list.

Lauren went on to tell Clark that in her line of work she comes across, and deals with many different companies, providing both products and services. She told him that it’s a delight to be treated with such respect and receive such wonderful customer service. She told him that it would blow his mind how many services DONT conduct themselves like we do.