Last week we had our hands full with a fairly large shed that was originally used to hold horses, and chickens. The home, and the shed were located in John’s Creek, right in between Alpharetta, and Milton. The original owner of the house, back about fourty years ago, was the one who actually built it, and boy!

He built this thing to withstand almost anything, hurricane, tornado, and probably even an atomic bomb. That’s how solid this shed was. What we thought would take us two days, because that’s your typical turn around on taking down a shed this size, wound up taking us, six days. It was sure built to last, everywhere where there should have been a 2×4, there was a 4×4, and everywhere there should be a nail, there was 40 of them. We quickly nicknamed the shed “MonstraShed”.

So we took the necessary steps to taken this monster shed down, aka “MonstraShed“. 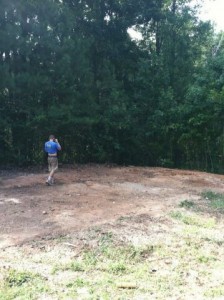 Most sheds out their aren’t anywhere near this size, and are almost never built as strong as this one was. The new owner of the home was actually having us take this one down, so that he could build a new, more convenient one, because this one was ancient, and wasn’t doing anybody any good.

We did learn some valuable lessons though, because if we ever come across another enormous monster like “MonstraShed” we will know exactly what to do. Hopefully that wont be for a while though, because, as fun as that sounded, it really wasn’t.

Tagged: Alpharetta, Before & After, Customer Service, Hauling, How To, Junk Removal, Light Demolition