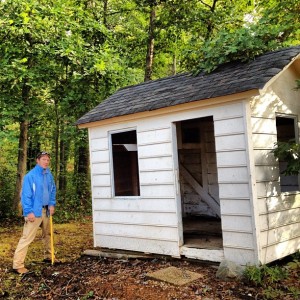 Andrew, a new customer of the Stand Up Guys, called in last Monday to ask us about helping him out of a jam. Andrew got himself into a shed removal dilemma at his Cobb County home and needed someone to help him out, he called the right place that’s for sure.

Andrew went on to tell Carson, who answered the phone from the Stand Up Guys Junk Headquarters, that he was attempting to rent out his house and live with his fiance. This way they could save money and even make a little extra on the side with rent money.

He found the perfect renters right away, they didn’t have any pets, had a small family, and were able to pay first and last months rent right away. The problem was that the renters really didn’t want the old crappy shed that was in the back yard there anymore.

Andrew had told them that he would have it removed before they moved in, but with everything going on with renting a house out and moving at the same time, Andrew just put the shed removal on the back burner.

Now that the renters were moving in, the old shed had to go, and it had to go asap. The renters had a little girl that was about 6 years old and she had quite the curious side to her.

The last thing that the new renters wanted was for their precious little girl to go wandering in the old shed and get herself hurt. There was a lot of old rusted nails sticking out on the inside of the shed, along with a bunch of old chemicals and yard tools. 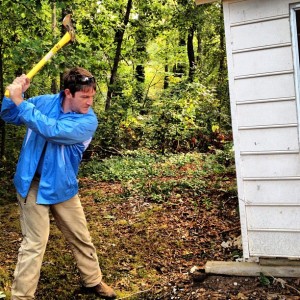 Just a war zone of hazardous things for a 6 year old. It definitely was not a place for a child, this shed needed to go.

Carson new that a big shed like this wasn’t as simple as swinging by and grabbing it. No, something like this needs to be taken down and demolished properly. Then once the shed is disassembled and taken down, that’s when we can load it up into the trucks. Carson new this would take some time, so he needed to find a big slot in the day, and he had to find the quickest one.

Carson made an executive decisions and decided he was going to send out a separate truck the next day just to cater to Andrew and his problem. Carson informed Ross and Christiaan of the job in Cobb County and all that it entailed. Ross and Christiaan said “ok…lets roll!”

Taking Down The Shed

The very next morning, Ross and Christiaan arrived at the home. They could see the shed all the way from the street. The guys also could tell by the size and stature that this shed was going to be a bear. But they knew good and well that this was definitely a job that they could tackle. 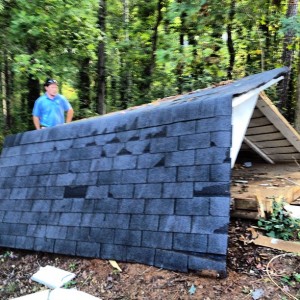 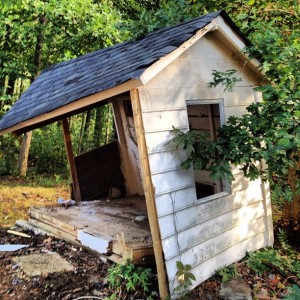 First Ross got out all the tools that they would need to get the shed down. A couple of sledge hammers, sawzall, extension cords, and a couple of pry bars. It doesn’t take too many tools to take down a shed, it takes more brain and brawn than anything else. At least that’s what Ross likes to say.

The two Stand Up Guys went to the front door to tell the new renters that they were there to take down and remove the shed. The family was so happy to see them and even happier that the ugly shed was going to be out of their lives.

First Ross and Christiaan knocked out all the plywood around the shed, this way they could get a clear look at the skeleton. Once the shed was down to the bare framing, they started to take out the 2×4’s that were bracing the corners. The got the two front braces out, then watched as the roof tipped over and fell to the ground just as they had planned.

Once the shed was on the ground it was much, much easier to handle. Ross and Christiaan then just began to use the sawzall and prybars to cut and pry everything off of the roof. This way things would be much easier to carry to the truck.

Now that everything was torn down, cut up and ready to go the guys then devised their plan to take everything to the truck and haul it all away. 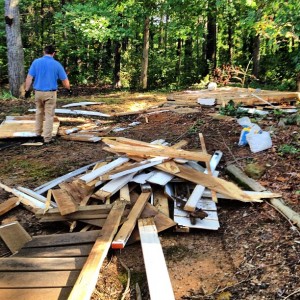 Time To Clean Up The Debris

Christiaan and Ross started huffin’ and puffin’ and began to drag all the now fallen shed debris to the truck. There was a lot of debris so they had to place everything just so in order for it all to fit into one load. The last thing they wanted was to have to come back for just a little bit of junk. They wanted me MAKE SURE it all fit in one load.

They guys dragged everything from the back of the house to the front where the dump truck was. They placed everything in a pile directly behind the truck. This might seem crazy to some, picking up all the junk twice. But to us its strategy.

Once they had all the debris to the front of the house, Ross then jumped into the back of the junk truck while Christiaan handed him piece by piece. This way Ross could stack it just the way he wanted. He knows that if he does it the right way everything will fit just right.

If the guys would have just drug everything to the truck and tossed it in there, most likely the truck would have filled up too fast from not being loaded correctly and they would have had to start all over.

We have down a ton of shed removals over the years, but this one was different. Andrew was so happy to get a call from the guys around 1pm the day after he originally called to tell him that they were all finished up.

Andrew couldn’t believe how fast we got this done for him. It wasn’t even a full 24 hours since he first called in to completion. Now that’s customer service. 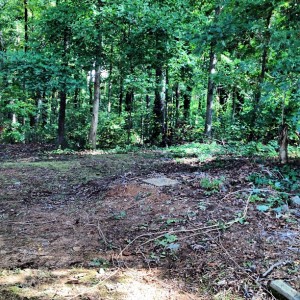 Andrew was raving about us over the phone and said he couldn’t wait to tell everyone he knew about the Stand Up Guys and how awesome we are.

Andrew wasn’t the only guy that was happy, the renters of the new house were also ecstatic to have it out of their site.

Once the guys were all finished up at the Cobb County home, the backyard looked as if no shed had ever called it home. The backyard was just spotless. Beautiful.