“Standing Out” at KSU Golf Tourney

Here at Stand Up Guys Junk Removal we try to get involved with the community in the Metro Atlanta area as much as possible. With even more than just our typical donating of items to the local donation centers or with with our mad crazy recycling efforts. So this weekend we decided to send out two of our very best to the 17th annual KSU Sports Management Majors Club Charity Golf Tournament for charity. 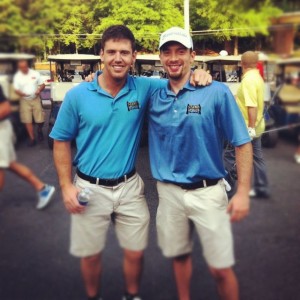 It was a dewy but sunny Fantastic Friday morning where two of our very own Stand Up Guys were on the scene. Clark “Clarkybear” Berry and Christiaan “Slammons” Sammons entered and participated in the KSU Golf Tournament Friday. The Tournament was to benefit the Chauncey Davis Foundation as well as the Sports Management Majors Club. So to put it lightly, we were PUMPED to be involved.

The Crew at Stand Up Guys are more than just pros at Junkin’ junk! We are comprised of a group of pretty decent athletes as well. Ranging from our incredible lineup on the Stand Up Softball Team, with Casey ‘The CEO‘ at leadoff, Ross ‘The Mechanic‘ hitting in the two hole and scoopin’ balls at second. All the way to Carson ‘The Crusher‘ hitting bombs and locking down short stop, and even Ryan ‘Triple McGhee” hitting doubles and triples all over the lot.

Then we get to the Stand Up Golfers, these guys can compete with pretty much anyone. Clark and Christiaan really impressed the spectators at the event and even caught the eyes of many with their powder blue shirts and Stand Up golf swings! Man those are some pretty swings… well Clark’s at least.

The two Stand Up Guys were able to meet some pretty cool people while hittin’ the course as well. Including the man himself Mr. Chauncey Davis, and even a few Atlanta Falcons players. Chauncey was impressed with the character of the young men and was glad to have them out on the links.

Overall the guys had a great time and were already talking about being out there next year. Keep your eyes open Atlanta, because you will see the Stand Up Guys Crew just about anywhere. If it has to do with giving back to the community, sports, or most importantly…JUNK you will most likely see one of the awesome Stand Up Guys.