The Call In – Stand Up Guys Junk Headquarters

Ben, a customer of ours that has utilized The Stand Up Crew’s services on several occasions, called into the our ‘Junk Headquarters‘ today, and Ben was in quite the time crunch. Ben used the Stand Up Guys Junk Crew a few times back in the summer of last year to clean all the junk out of his basement in his Atlanta, Midtown area home.

Ben expressed to us a few different times how happy and impressed he was with our service while we were working at his home, so we knew we would be hearing from him again one day. It was just a matter of time. Once you have dealt with the Stand Up Guys you will be hooked for life, we’re just that good. 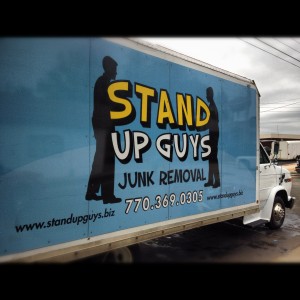 Ben went on to tell us a little about the problem he was having, and whether or not we could help him out. Although he was just asking that as a formality, in reality Ben already knew the answer, of course the Stand Up Guys could help him out of a junky jam.

Ben told us that he has been renting out a storage unit in the Atlanta area, near his home in Midtown, for over four years now. He has been using the storage unit to hold the leftover items that he doesn’t have room for at his pottery store. Ben owns a very successful pottery store in Buckhead.

The reason Ben got himself into this little time crunch was because instead of leaving the leftover inventory from his store in the storage unit, over the last few months he and his employees have just been filling it with the junk from the store that they weren’t using.

So before Ben knew it, the storage unit was full of junk, and now he desperately needed the space because his store is overflowing with extra merchandise and he needed somewhere to keep it.

We told Ben not to worry about it, because believe it or not, we have heard similar stories with storage units over and over for years. Everybody out there rents out storage spaces with the purpose of keeping stuff there that they want to ‘preserve’, but instead it somehow always turns into a glorified personal landfill.

Casey, who was talking with Ben over the phone told him, “take a deep breath and relax, we are going to help make sure everything gets done right away. You don’t have to worry any longer, the Stand Up Guys are on the case.”

Making It Out To The Storage Unit 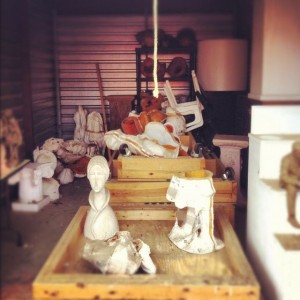 Casey made a call to both Carson and his crew, who were out at a job in Marietta, and he call Clark and his crew, who was doing his third job in Alpharetta that day. They both told Casey the same thing, “Sorry boss, we just can’t get to anything else today, we’re too slammed.”

So Casey grabbed Ryan, who was also in the office and told him it was time to hit the streets. They both put on the work uni’s, (there are always a few extra pairs of uniforms in the office just in case of emergencies) and hit the road. The two office jockey’s had to drive Ole Betsy since the other two, newer trucks were on the road.

Betsy might be a bit older than the rest of the fleet, but she has seen and done it all. There isn’t anything that Ole Betsy can’t handle. She has been part of the Stand Up Guys Fleet of junk trucks for years and years, she was one of the original ‘junk busters‘. No matter what, Betsy will always have a place in all of our hearts.

Today was Betsy’s day to shine, she had her chance to show the world that she still had some good miles left in her, and that she was just now hitting her second wind.

Ryan and Casey hopped in Ole Betsy, gave her a little TLC, started her up, and hit the streets.

Cleaning Out The Junked Up Storage Unit 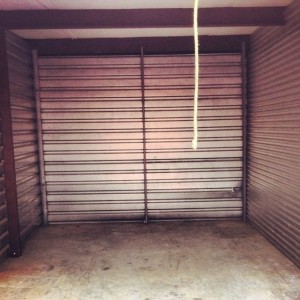 Casey, Ryan and Ole Betsy arrived at the Atlanta Storage Facility right on time, it was actually within 2 hours of Ben’s call in. Ben was even more impressed than usual. Little did he know how well we treat our repeat customers (we treat all our customers great though so…).

Ben walked the two Stand Up Guys over to the outside storage unit to show them his issue. Ben even had is company moving truck parked right next to the storage unit, it was packed to the gills with the merchandise that he needed to put in the unit. To say that he was on a “time crunch” was putting it lightly, this job was a must for him.

The two office jockey’s took one glance at the junk in the storage unit, looked at Ben and simultaneously said “No problem”. They both knew that they could knock this junk out in a matter of minutes. That’s how good they are, well at least Casey is. Casey might work in the office now, but there was a time where he wrote the book on junk removal, back when he was on the truck daily.

Ryan hopped in Ole Betsy and backed her right up to the junk in the storage unit, with Casey’s help of hand signals of course, (always remember, safety first).

The two Stand Up Guys strapped on their gloves, tightened up their boots and britches and got right to work. Ryan stayed inside the bed of the truck to make sure everything was stacked accordingly, while Casey was in the unit passing him all the junked up items.

With their team work, hard work, efficiency, and determination, the two guys had all the junk from the storage unit into the truck in a matter of 28 mins on the dot. Now that is impressive if I must say myself.

Once they had all the junk loaded up into the truck, the two guys realized that Ben was there alone, and that he was planning to unload his truck all by himself. Well these two Stand Up Gentlemen were, in no way, going to let this one fly. They told Ben that they would help him unload the whole thing, because by himself it would have taken at least three hours.

So the three of them huffed and puffed, and unloaded Ben’s massive truck of pottery merchandise into his now spotless storage unit.

Once again Ben was extremely satisfied with his experience with the Stand Up Guys. I wouldn’t be surprised in the least if we hear from him again in the near future. Like I said before, once you use the Stand Up Guys Junk Removal Crew once, your hooked for life.