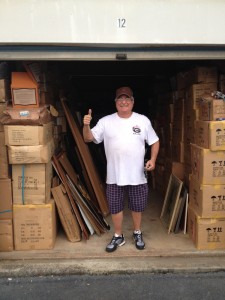 Last week we got a call into our Stand Up Guys Junk Removal Headquarters from a repeat customer of ours, and one of our favorites, Justin. Justin has been using our services here and there for the last few years. He has always been impressed with the Stand Up Guys and it kept him coming back for more and more.

When Justin called in this time he had a new project he needed help with.. His storage unit. Now believe you me, we’ve dealt with our fair share of storage units and then some. This one though, this one was the size of a semi and Justin needed it all organized and half of it thrown away. This was a job that only the Stand Up Guys could handle.

Carson, the Stand Up Guy that answered Justin’s call told him that we could have a crew out as soon as he liked. Justin told Carson that he wasn’t going to be ready until early the next week. The two gentleman decided on Tuesday after lunch. The earlier the better though, because from the way Justin described this job, it was going to be a biggin. 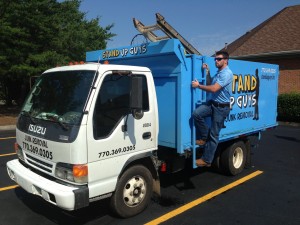 The next Tuesday after their first two jobs, Christiaan and Paul headed out to Alpharetta to take a look at Justin’s storage unit. Christiaan made sure he completely cleared out the Stand Up Guys Junk Truck before heading out there as well. She was spic and span on the inside. Plenty of room for some storage unit junk.

Christiaan and Paul arrived at the Alpharetta storage unit right before 12pm. Right about the same time that Justin was pulling up. He had a big smile on his face when he saw the truck sitting there waiting for him, he had been waiting to take care of cleaning this unit for years. Today was the day.

After exchanging pleasantries, Christiaan and Justin walked to the storage unit to take a look at everything. Just like he had described over the phone, this was a biggin’. Christiaan squeezed his way inside the unit to get a better look at what they were dealing with. He looked over everything and offered Justin the best price he could. Like always, Just loved the price and asked if we could get started right away. “Of course we can!” replied Christiaan.

Cleaning Out The Storage Unit

Paul and Christiaan strapped up their boots, put on their gloves and got to work. First the two Stand Up Guys pulled out everything in the front that Justin said was good. They stacked all the on the outside of the unit. Justin basically stood in the unit with them and told them piece by piece what was trash and what was staying. They took everything that was junk and put it straight in the truck. The boxes and such that were staying began stacking high on the outside of the unit.

The three gentlemen worked for a few hours, just pulling junk boxes out of the unit into the truck and stacking items he planned to keep on the outside. One after another, box after box, Christiaan and Paul worked their butts off getting everything out.

After an hour or two they hit the back wall. They got everything out of the unit, it was completely cleaned out. This was a wonderful sight for Christiaan and Paul, but their work wasn’t anywhere close to being over. They were just glad that first initial part was behind them. Now it was time to get the boxes and items that were staying back in the unit.

Justin didn’t have any particular way he wanted to organize all the things that were staying, he just wanted it to be neat and he wanted to be able to walk around in the unit and get to different things. So that’s what Christiaan and Paul did. They gently carried in all the boxes from the outside and stacked them neatly back inside the unit. They stacked everything around the edges and kept a pathway in the middle of the unit so that Justin could walk up and down it and get to every single box.

Before they knew it, they were done. All the boxes were back in the unit and neatly stacked just how Justin wanted. Like always, Justin was very pleased with everything. He told Christiaan and Paul that no matter how high he sets the bar with us, we always come through. Now that’s what you call customer service. Thanks Justin!