We Love Our Job 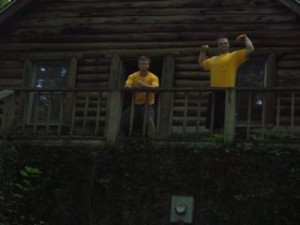 There is one thing that is always consistent with our job here at Stand Up Guys, we never know what were going to run into next. Sometimes we come across really nasty, gross stuff, sometimes we come across mad cool stuff, either way it is always interesting. This particular morning we pulled up to our first job in Atlanta and we could not believe the size of the house. The owner of the house where we were was actually the owner of Aarons, he was eighty-three years old and had four houses, (all his) on his property, now that is cool. He told us that he started his business with a few hundred folding chairs in an old warehouse, this year alone his company is projected to pull in over 2 billion in revenue. I thought that was just so cool, every business has to start somewhere. This even gave me inspiration myself, if he can start from nothing and turn a company into monster like that, who knows what we could turn Stand Up Guys into. The sky truly is the limit.

The house on his property that we were working on was an old wooden cabin that he had built for him and his buddies in 1940. It was built way back in the cut, away from view of anybody, it actually took us at least 30 mins to get our truck all the way back there, that’s how tight the dirt road was. Working at this cabin made us feel like we should be on the history channel because it was so old. We work in so many of the same houses and properties on a daily basis, removing the same old junk that it is just too cool to get away from the cookie cutter houses and see something so interesting. The cabin actually had a tree fall on it about fifteen years ago and made the roof cave in and the walls separated slightly. So they actually hooked a steel wire from one end of the cabins base to the other and tightened the wire until the house was straight again, that’s something you do not see every day. So that’s the reason here at Stand Up Guys we really enjoy our jobs, we never see the same thing twice and we never know what we will see next.