Why Junk Removal is Necessary in a Bad Economy

A Day In Age Before Stand Up Guys

In 2003, junk removal was almost nothing. People had no way of getting rid of bulk junk and trash on their own, and the actual junk removal service was barely thought of. Some handymen were doing hauling as a side project for their business, but only a few professional services and they were nothing to ride home about.

The Dawn Of A New Era

Around the same time, Stand Up Guys started with just a truck, trailer, teenager and a dream. Wanting to help people, Casey realized that ‘junk removal’ was a legitimate business and future industry and that this could really take him somewhere.

Business kept his head above water until the recession hit. Thinking that his business was going to go under, he used his last resort and put out signs around the metro area. Soon, calls were rolling in and he was able to provide for himself and realized that this industry could thrive in a bad economy.

As more work came in, Casey was able to upgrade his advertising to the internet and more. Working nights building his website, he progressively learned what worked and what didn’t. As he gained more resources, more people were finding out about the type of service he was offering. Although, people were not spending money around this time, more and more houses were getting foreclosed on and people were leaving in the middle of the night with everything left behind.

Property managers were left with a huge problem and that is where Casey concentrated on offering his services by calling different property manager companies and realty groups. He was able to hand out his cards to different businesses and explained how Stand Up Guys would benefit them. This way, the PM could get the whole house, apartment or condo completely cleared out and have a cleaning crew come in after. Soon Casey was making friends with the right people and getting referrals from them as well. Needless to say, Casey was learning quickly.

Junk Removal For Your Everyday Man 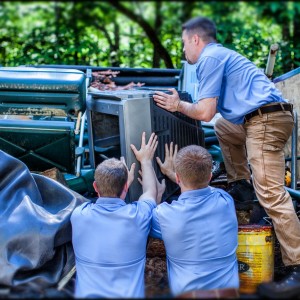 Now don’t get me wrong, that was not the only area in need of junk removal services. A lot of people were downsizing into smaller homes. In the process of moving, they would be left with piles of leftover moving junk, they were getting rid of numerous items that they could not take with them.

Most people had no clue what to do in this situation. They knew renting a truck, paying per mile, paying dumping costs and paying gas was out of the question. In the process of a move, no one has time for that. This is where Casey’s internet advertising came in handy. People were typing into Google exactly what they needed done, and Stand Up Guys Junk Removal was at the top of the list.

Also, some people were turning their finished basements into an apartment and renting them out for cheap. But again, they would need someone to clear out the basement to create enough space for a tenant. Not to mention the contractor that they hired would need someone to get rid of all the leftover construction debris too. The Stand Up Guys were coming in quite handy to many different people and industries.

The Stand Up Guys

You may not notice it, but junk removal is everywhere. Whether you do it yourself, or hire The Stand Up Guys, junk removal is necessary. Clearing out your garage so you can finally park your car in there, cleaning up remodeling debris from upgrading your kitchen or getting rid of old furniture to have space for the new furniture, these are all reasons you need junk removal. So instead of stressing yourself out about it, take a moment, call The Stand Up Guys and let us take care of your headache…after all, “Your Clutter is our Bread and Butter.”