Well yesterday had your typical “Manic Monday” feel to it. It was a little gloomy outside, little cold, and the traffic was just horrendous in the morning. Our Stand Up Guys Crew had a yard clean up in East Atlanta on our plate, so as you can imagine, we were pretty excited. The excitement for it trumped the manic Monday feel by about 8:30am, so it wasn’t that bad of a morning after all. 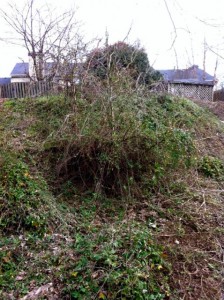 The cast of characters for our Monday Yard Clean Up Fiasco: The boss man Casey, our regional director Carson, and the one and only Ross. Ya, I know, it was a pretty stellar group to all be going on one job together. Usually those hierarchy’s are running their own projects daily, but that just shows you the importance of Monday’s job.

The customers issue: Well, Melissa and John, are a newly wed couple that just moved into East Atlanta. Originally they were from Pittsburgh, but John got a promotion with his company, and they uprooted the newly weds down here, to the wonderful south.

The house that they bought here in Atlanta, is a beautiful 3 bedroom, ranch style home, but it did have one problem, the yard. John and Melissa had big plans for putting a nice pond, and patio in the back yard, but when the landscape designer came over to look at everything he didn’t like what he saw. He

told them that in order to get a better look at the yard, and for him to get an idea for a layout, they would HAVE to have the yard cleaned.

The yard was filled with fallen limbs, and branches, and whoever lived there before probably hadn’t raked in 10 years. The landscape designer told the couple that his company could clean it up for them, but their minimum, because of the size of the company was $5000, and even he told them that was outrageous for a yard clean up. 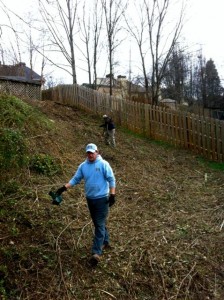 The Customers Solution: Well the customers solution was simple, call The Stand Up Guys. The landscape designer has worked with us a few times in the past, so he always definitely been quick to recommend us to his future clients, and he told them all about us. When they called, they were expressing to us how badly they wanted to get started on their pond, so that meant they wanted the yard cleaned up asap.

Well we always take care of our repeat customers, so that is why we sent out the Stand Up Guys big wigs for this yard clean up in East Atlanta. We even brought two of our trucks, and a few extra hands, so that we could finish this bad boy up in one day. Because with one truck and two guys, (like what we normally send to a job) it would have taken at least three days, but John and Melissa did not want to wait that long.

Well just like we always do, we delivered. We got to the property in East Atlanta right around 8:45, and got to work quickly. By lunch time it was quite apparent that we were going to knock this bad boy out in no time. By 3:30 it wasn’t apparent anymore, instead it was fact. Yes we finished it all up before rush hour traffic hit. So all in all, everybody was happy at the end of this “Manic Monday”.