Sandra is one of Stand Up Guys oldest customers. She has been using our services once or twice a year, for the last 5 years or so. She has had everything from simply getting rid of a couch, to us helping her clear out her entire basement in her Buckhead home, and she even used us when she moved out of her home a few weeks back.

Sandra is a wonderful woman, with a big heart, and we love working for her. Her one flaw though, is just the fact that she tends to be a little bit of a hoarder. Hint to why she uses us as much as she does. 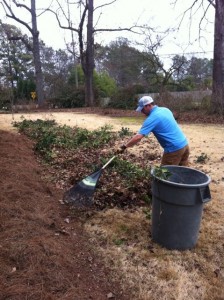 Well, Sandra moved out of her home in Buckhead, and into a quaint little place up in Ansley Park. The house is beautiful, the neighborhood is nice, I mean all in all she had quite the upgrade. Except for one thing.

That one thing was a big one too. The people that sold her the home gave her a great deal on it, but it came at a steep price. They told her they would give her a large break on the price because there was so much junk left behind in the home, and I guess it was easier for the previous home owners to just sacrifice a little money at closing, rather that deal with all the junk themselves.

There was junk in the attic, junk in the basement, junk in the living room, and worst of all, the entire yard needed to be cleaned of all it’s junk as well. 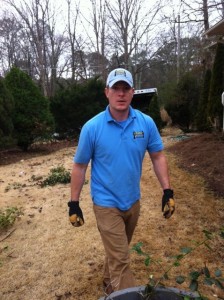 Now the yard was the worst part, and it was also what Sandra wanted done asap. It was such an eye sore, and she didn’t want her neighbors to have the wrong idea of her right off the bat. I mean the yard was just loaded with junk and debris.

There was brush, and debris from a few fallen trees in the back yard, there was even some debris scattered in the side yard, on the pine straw. Also, brush wasn’t the only problem, there was also household junk back there as well. There were some hoses, some old construction material, some house garbage bags, and yes, even a microwave. Why in the world would someone put a microwave in the yard?

We don’t know the answer to that question, or a lot of the other questions that went along with this junked up back yard, but we did know the solution. That was the simple part. All Sandra needed to do was sit back and leave it to the Stand Up Guys.

The Answer To Sandra’s Problem 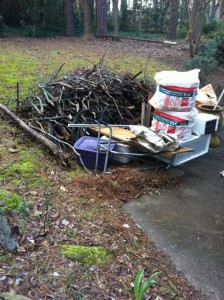 Well, Sandra already had all the right tools in place for the job. Like we mentioned earlier, she had used us quite a few times, and she new exactly how awesome we were, and what all we could handle. So as soon as Sandra called into our office on Monday, we deployed the junk troops to her new Ansley Park home immediately.

Once Ross and Carson got there, they got straight to work. They new that Sandra was freaking out a little, and the sooner this was all gone the better.

First the guys got out all the necessary tools to clean up the yard.

Ross and Carson raked, and bagged up all the yard debris from on top of the pine straw. They cut up all the longer branches and smaller trees with the chainsaw, and placed them on the tarps. They walked the yard a few times and filled up all the trash cans with all the smaller little junk items, and put everything in a neat pile at the end of the driveway.

Removing All The Junk From The Ansley Park Home 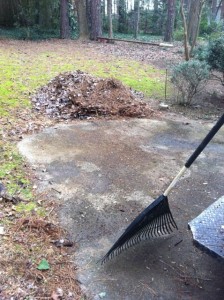 Once everything was in a nice neat pile. The guys started loading everything up into the truck. The pile was big, so they had to take a couple trips, but Sandra’s new Ansley Park home isn’t far from one of our favorite transfer stations, so that was a breeze. Also, loading the truck up is a nice easy task when you compare it to all the work we had to do just to get the pile together.

Before Sandra new it, everything was gone, and like always she was ecstatic. Every time she has called on the Stand Up Guys Junk Removal Crew to get her out of a bind, we have delivered. This is what makes this job so satisfying at times. When people need us, we can always be there to help, and that is just a great feeling.

All in all, today was a great day. We got to hang out in Ansley Park, which is an awesome place. We got to help one of our all time favorite customers, and the weather was pretty nice to boot. Great day!