Renting A Dumpster In Franklin, TN 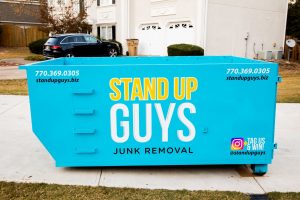 There are tons and tons of reasons why we pile up junk, debris and overall clutter in our lives. That’s a fact that’ll most likely not change any time soon, it’s just human nature. Instead of trying to change people, we’re here to try and help. Help with getting rid of the unwanted items and debris that are cluttering up people’s lives all throughout Franklin, TN. How do we help? Simple. With the one and only Junk Bucket Dumpster.

We make the entire process of renting a dumpster, to filing the dumpster, to having everything disposed of as simple as possible. All you have to do is give us a shout, let us know that you need a dumpster and we’ll have one out to you right away. We’ll place it in a spot that makes loading as easy as possible for you. Then once you have finished the work and all the junk is gone, we’ll be by to pick it up and dispose of everything.

Renting A Dumpster In Franklin

Last week we got a ring a ding-ding from a new customer named Lindsey in Franklin, Tennessee. Lindsey called up and spoke with Ross over the phone. She explained to Ross that she had a garage full of junk and clutter that she HAD to clear out by this week. She just couldn’t take it anymore. Lindsey was wondering if there was a way for her to sift through all the junk in her garage and throw out what she wanted and to keep what she needed. Without making an even bigger mess that was. Ross had the best answer.

The next morning a couple of Stand Up Guys dropped of a shiny baby blue Junk Bucket Dumpster in Lindsey’s Franklin driveway. Lindsey was oh so excited to see that beautiful dumpster put on the driveway, right next to the garage. The guys weren’t even fully out of the driveway before Lindsey and her husband were knee deep in the garage and throwing junk into the dumpster. You could tell they were motivated and ready to get rid of the clutter.

It was only about 48 hours before Lindsey called up again and once again got ole Ross on the phone. She thanked him up and down for the awesome service and told him she was ready to have the junk hauled away. “Have no fear, Lindsey. We’ll have that Bucket out of there in no time.” replied Ross.

About 2 hours after the call in the Stand Up Guys Junk Removal Office, a truck was pulling up the the Franklin home. Two uniformed Stand Up Guys Professionals hopped out, tarped the dumpster and loaded that bad boy onto the truck. Lindsey and her husband watched with large smiles on their faces as all the junk from their garage was now being carried away. The garage was now spotless with tons of room for activities and storage. The Junk Bucket Dumpster did it again! Another happy customer.