It all started two monday’s ago; Casey received a call in the Stand Up Guys Junk Headquarters from a woman that claimed she had one of the biggest projects that the Stand Up Crew will deal with to date.

As usual, Casey calmed her down, told her this is nothing we have not heard before– someone calls, gives us a subjective description of their job, proclaiming that it is way too much to handle, that three guys can’t handle the work. With trust in his guys, Casey sent Clark, Christiaan and Edwin out to John’s Creek to give a professional opinion, un-wavered by this woman’s apprehension.

The Arrival At The Johns Creek Home 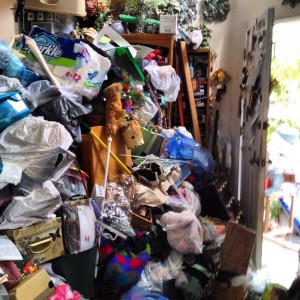 When the Stand Up Crew arrived, Casey got the call from Clark; turns out the job was as described by the woman (pretty bad). There was junk stacked wall to wall, 10 feet high covering the inside of the house, so much so that the stairwell leading upstairs was blocked, preventing the homeowner from using them for the last SIX years!

Clark explained Teresa, the woman showing the guys the junk, how we charge, but told her not to worry because it’s nothing they hadn’t seen before. Although these were somewhat uncharted waters for a few of the crew members, she was put at ease because they agreed to take it one step at a time; giving her time to look at items before their taken, and the ability to stop the job early if she feels uncomfortable.

Once the terms were set, the crew was ready to get the job started. Clark asked Teresa to follow him through the house, going room to room to establish an order that would allow for the most convenience. She decided that making a pathway in the living room would be the most important, so the boys cleared the way, making space for the daunting task of the upstairs bedrooms. Finally, the “road was paved“, and two truck loads later the crew was ready to head upstairs and, for the first time, see what the bedrooms had to offer.

There was a total of two bedrooms upstairs; one of which was ceiling high in old junk furniture, and the other could barely even be accessed due to clutter! Slowly, the first room was cleaned out and while Clark took the next load to the dump, Edwin squeezed his way into the second bedroom, which turned out to be full of small, miscellaneous garbage. It was overwhelming to say the least. The room was 15 feet by 30 feet, and Teresa informed Clark that there was only one item in the room staying, and that was a green sofa. Clark surveyed the room for several seconds, turned to Edwin and told him that the sofa was nowhere to be seen: it had disappeared in the junk! 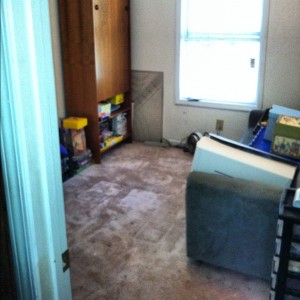 Fast forward to the end of the day, and the boys completed the job (well the living room and top bedrooms at least, there is still much more to be done in the future) — complete with sweeping and even removal of the carpet throughout the house. Teresa apologized again for letting the house become such a mess, but Clark and Edwin reassured her that there was nothing to worry about, and we’ll be there the next time she calls, as well.

We later found out that it wasn’t actually Teresa’s house– as it turns out, it was her fathers. Teresa and her husband, who recently was honorably discharged from the military, planned to move home because her mother-in-law is a smoker and it didn’t settle well with her son’s lungs, so they were fixing up this house for them to move in to. We were more than happy to help!