Playset Removal In Raleigh - The Stand Up Guys 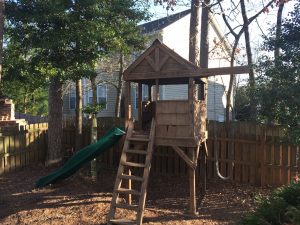 Yesterday we got a call into our SUG headquarters here in Raleigh from a new potential customer. Her name was Wendy and she had an old playset in her backyard that she was ready to part ways with. Wendy explained that the playset had been there for years and her kids were all grown, they had no use for it and the playset was simply falling apart anyways.

Spencer, the Stand Up Guy that answered Wendy’s call, assured her that she made the right call and that we could most definitely help her out with everything she needed and more. Spencer explained to Wendy that we take care of this type of work and remove old playsets all the time. “It’s just a walk in the park for us.”

Wendy was excited to hear this. She was worried it was going to be hard to find a company that could help her out with removing the old playset, but she was wrong. It was as easy as pie because The Stand Up Guys Junk Removal Crew are perfect for her! The two nailed down a time the next day for The SUG Crew to come out and take a look at everything and remove the playset.

The next day, bright and early like she had requested, Wendy got a call from Austin (her Stand Up Guy for that day) letting her know he and the crew were on the way to her home in Raleigh. Austin and Dylan had gotten out real early to beat the rush at the dump and the Raleigh traffic. This way they could make it right on time to Wendy’s appointment, being late is not what The Stand Up Guys are about.

Removal Of The Old Playset In Raleigh 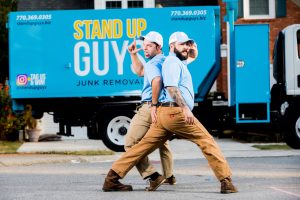 The Stand Up Guys Junk Truck arrived out front of Wendy’s Raleigh home about 20 minutes after she spoke with Austin. Wendy was so excited to see the truck pull up that she rushed outside and greeted the guys before they even had a chance to get to the front door. Wendy, in all her excitement, took the guys right around to the backyard to take a look at the old playset.

Austin and Dylan examined the playset a bit, discussed how they would take it down and how long it would take. After that, Austin offered Wendy the best possible price on taking down and removing the old playset. Wendy was ecstatic to hear such a great price and told the boys she was ready to roll.

Austin and Dylan wasted zero time. They went back to the truck and grabbed all their tools. After getting what they needed they got straight to work taking down the old playset. Dylan started by detaching the roof from the frame. While he was doing that, Austin was taking off all the swings and little nick nacks attached to it. After the roof was down, both Stand Up Guys focused their attention on the stairs and side walls of the playset. They had those off in a jiffy as well. Once that was done they were just down to the frame.

The frame was light enough to pick up so that’s exactly what Dylan and Austin did. They picked up the frame of the playset and simply carried it to the truck. Once inside the truck they broke it down so that it took up less room (which saves Wendy money). Now for the grunt work. The two Stand Up Guys went back into the backyard and began to lug all the junk they had dismantled from the playset and lugged it to the truck. They took a good 10-15 trips before they had everything spotless and the playset was completely gone.

“It looks like it was never even here!” Wendy said ecstatically. The two Stand Up Guys could see that Wendy was extremely happy with the job and was excited to have her backyard back! This was more than enough for Dylan and Austin. They said their goodbyes and left Wendy in her happy state, simply enjoying her new space.