Shed Removal in Raleigh - The Stand Up Guys 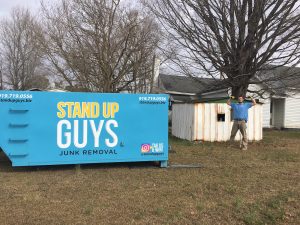 Last week we got a call into our Stand Up Guys Junk Removal Headquarters from an old client of ours in Raleigh, Mr. Justin Owens. Justin has used The Stand Up Guys for tons of different projects around his home for the past few years. We helped him remove an old hot tub in the fall of last year, we cleared out the junk from his attic last spring, and we even helped Justin move his new washer and dryer upstairs when the delivery guys only brought it into the garage. So, it’s safe to say Justin and SUG have a great relationship.

This time around, Justin was calling to see if the SUG Crew could help him in removing his old shed once he tore it down. “Don’t even worry about taking it down, Justin. We’ll come out and do that for you AND haul it all away” said Spencer when he was speaking with Justin over the phone.

Justin was surprised, he knew that the SUG Crew was awesome and all, but he didn’t know we’d help demolish and remove his old shed. This was a huge weight off of his shoulders. Now he didn’t have to find the time and energy to knock down the crappy shed in his backyard. All he had to do was make an appointment with us, and that was that.

Spencer and Justin went through Justin’s schedule and nailed down the best day to get the job done. Since the shed was outside, we just told Justin we could do the entire thing over the phone and send him after pics so he knew it was complete. This way he wouldn’t have to take off work AND the eye sore in his backyard would be gone when he got home. Win win.

Removing The Old Shed In Raleigh 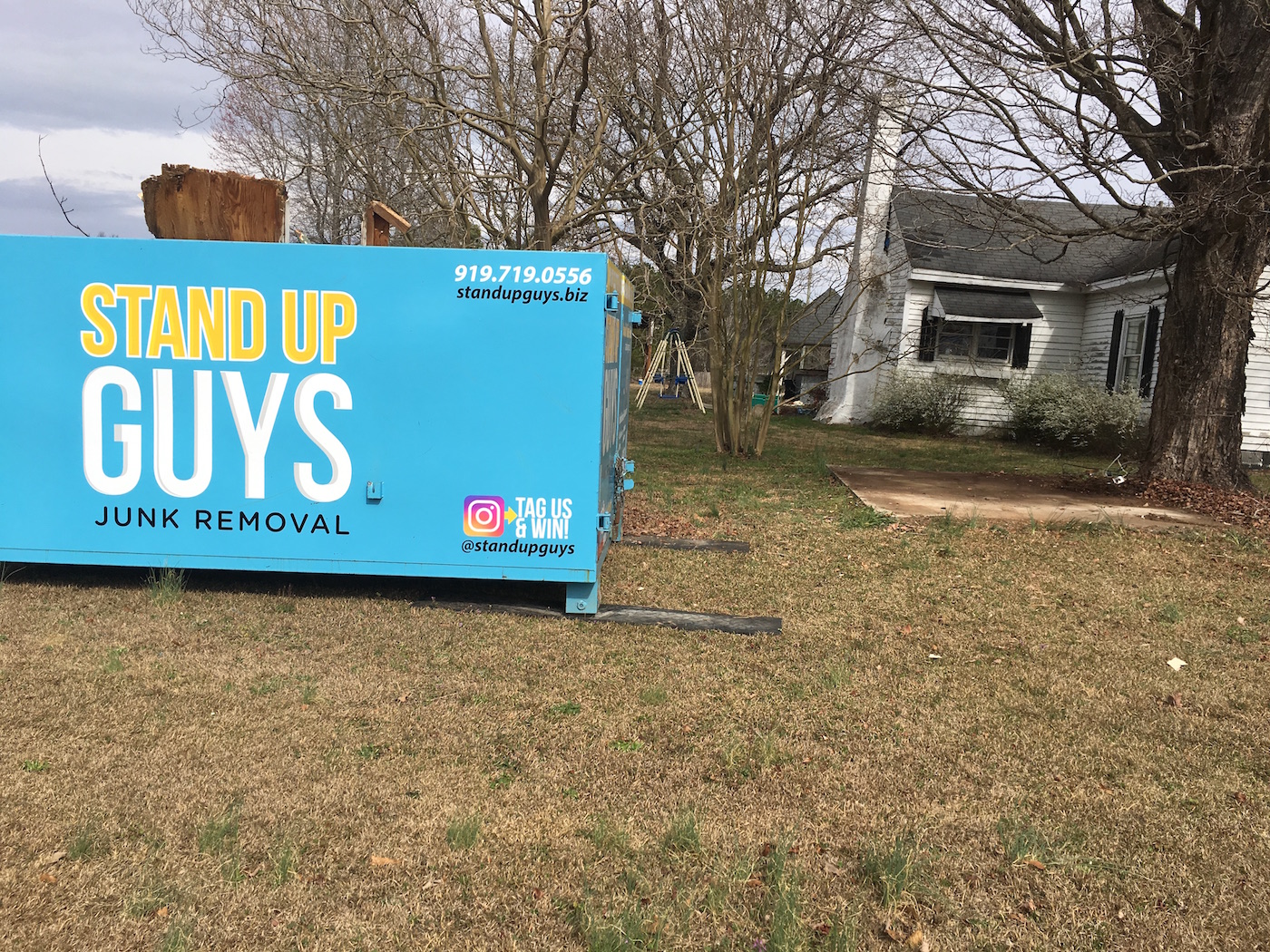 Two days later, bright and early in the morning under the beautiful North Carolina morning sky, The Stand Up Guys Junk Removal Truck was in route to Justin’s Raleigh home. Dylan and Austin were the Stand Up Guys that were put on the job. These two studs have taken down their fair share of old junk sheds over the years, so this shed removal wasn’t going to scare the likes of these two one bit.

When the two Stand Up Guys pulled up to the Raleigh home, they could see the old junk shed from the street. “No wander he wants this eye sore gone” said Austin. Justin has a beautiful home and the last owners just left this shed in the back yard for him to deal with. It takes away from the beauty of the house. Not for long though.

Dylan backed the truck right up to the shed and dropped the bucket. They like to drop the bed so that it’s easier to load on jobs like this. It’s awesome to simply walk into the truck with junk, rather than throw it up and over. Austin grabbed the tools and both of them got to work.

The two started out by gutting all the old junk that was leftover in the shed. You don’t want that junk to get in your way when taking the shed down. Once all the junk was removed, the two Stand Up Guys started in on the roof of the shed. Since it was tin, it wasn’t that hard for them to remove. Dylan demoed the corners of the roof while Austin pulled each piece of roof tin off. In no time the roof was off. Now the easy part; removing the walls.

Both Dylan and Austin went inside the roofless shed and began to do what all great demo teams do. They kicked and kicked at the walls until the entire thing collapsed on itself. BOOM. The shed was down! Now all they had to do was pick up the pieces, load up and head out. That’s exactly what they did. 45 mins and they were in and out.

Austin sent Justin the picture above after they completed. This gave Justin peace of mind at work and probably made his day a heck of a lot better!