Today Stand Up Guys had one of our more common job in Atlanta, removing Railroad Ties. Railroad Ties are such a common item that people call us about because they just suck to move around or get rid of yourself. They always take at least two guys to pick up (some times three) and you need an extra big truck to put them in. They are far to big to fit in the back of your average pick up truck. All around Railroad Ties are just a hassle to have to deal with yourself. Of course though, The Stand Up Guys Junk Removal Crew handles all your Railroad Tie Removal with ease. 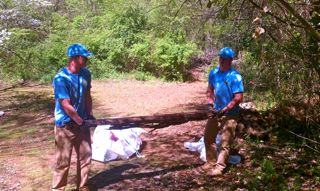 Removing Railroad Ties are one of the more expensive items to get rid of because they are, most of the time, heavier than other items, and the landfills charge by weight. Also, there is no way of recycling railroad ties, or doing anything other than trashing them for that matter. Here at Stand Up Guys Junk Removal we still try and give you the best deal we can on Removing your Railroad Ties though.

We cut the cost for labor way down, and we get rid of Railroad Ties in bulk to keep the dump fees down. Most of the time when you do the math, after renting a big truck, picking up all the Railroad ties, hiring labor, and paying for the dump, you would wind up spending more money and time doing it yourself. So save yourself the annoyance and just call Stand Up Guys Junk Removal, and we will have two uniformed professionals out to asses your Railroad Tie removal with in 24 hours.