Driveway Full Of Junk In Alpharetta

Just last week, early at the The Stand Up office aka ‘Headquarters‘ we received a call from Matthew in Alpharetta. Matthew was enquiring about removing a pile of demo debris and household junk that had been sitting in his driveway for weeks. 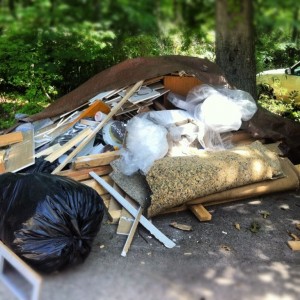 At first Matthew’s wife didn’t seem to mind the mess too much, thinking he would have it removed in no time. Well after a week or two of the junk just sitting there in the driveway, the misses had enough, it was time for that junk to go! Along with the fact that their Alpharetta neighborhood wasn’t too fond of it either. This had become a problem.

When Matt called into the office he spoke with Ryan, and right away Ryan explained to him that the Stand Up Guys would be a perfect fit for him and his little junk problem. His information was plugged into our system and the next day, Carson and Ross were on the way to hand out their free estimate!

Matt had been weighing his options for about a week and realized a dumpster would be too expensive for the amount of junk he had, plus he would be stuck doing the labor and having the dumpster sit in his Alpharetta driveway for who knows how long. A dumpster to some seems like a good idea in theory, until you actually look at all your options. Then the dumpster doesn’t seem so appealing anymore, especially after you meet the Stand Up Guys.

After talking with a few junk removal companies, Matt started to think this whole process was going to be tougher than he thought. None of the junk removal companies he spoke with seem to fit his price or schedule until he made his last call to The Stand Up Guys. We were able to help Matt with both scheduling around his busy life and answering any and all the questions he had.

Carson reassured Matt everything would be taken care of just the way he wanted and that nothing was going to be left behind but a clean driveway. Matthew gave the O.K. on the removal, and in no time, Carson and Ross began making Matt’s life a little more easier and a lot more junk free! 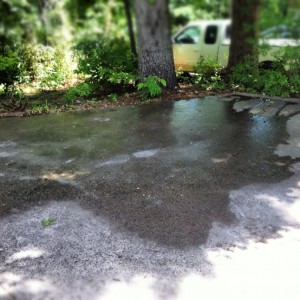 Carson told Matt to relax, not to worry, and have a seat while they started loading all the junk in the truck. There’s no need for our valued customers to be outside in 100 degree heat when they don’t have to. Carson encouraged Matt to go inside, take a load off and sip of some ice tea. The Stand Up Guys were on the job, so he could be reassured that it was going to be done right.

Ross hoped in the truck and began stacking all the junk in the back while Carson handed him the junk from the driveway. Ross emphasizes on stacking everything so the customer gets the best value and also the Blue Crew are able to fit more jobs per load, it’s a win win when we have Ross on the job stacking like a pro.

After all the junk was loaded up in the truck, it was broom and shovel time. We sweep the whole area in which the junk was located so the space looks just as it did before the junk was there. Just doing the little extra goes a long way with our customers and they appreciate it very much!

Everything was packed up and the driveway was swept, Matt was now a junk free man and hopefully his wife wasn’t mad at him any more. Carson knocked on Matt’s door one more time and did a walk thru to make sure everything was how it should be, and indeed it was.

Matthew was so ecstatic, he gave Carson and Ross big hugs. He could not wait to tell his friends and family about the experiernce. After Carson and Ross left the house, Matthew rushed inside and logged in to Kudzu, and left a great review for future shoppers. Another job in the books and another customer left with nothing but a smile!