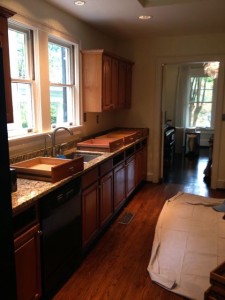 Last Monday we got a call into the office late in the day. The call was from a new potential customer, and her name was Mandy.

During the phone call Mandy went on to inform us that she was looking into getting a whole new kitchen in her home located in the Eagle Watch subdivision in Towne Lake. She wanted new countertops, appliances, you name it, she wanted it.

Well Mandy was in luck, because she made the right call. Ryan, who was in the office that day, told Mandy that we could come out and take a look at everything for her and that we actually had a general contractor that we recommend on a regular basis. 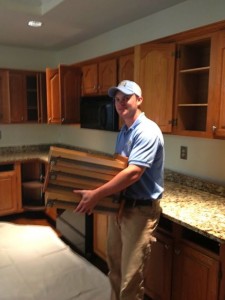 Ryan told her that it would be no problem for us to introduce the two. This way she could keep her options open about her new kitchen.

We set something up with the Mandy for the following Friday. We just planned on coming out, giving her a free no obligation estimate, and introducing her to our trusted friend Thomas over at East Cobbs Best Remodeling. Like I said, we recommend him to tons of our customers, and we have heard nothing but raving reviews back from them over the years.

Mandy answered the door of her beautiful Eagle Watch home with a gigantic smile on her face, we knew right off the bat that she was going to be a great customer. She was very inviting and polite, just an overall wonderful host. 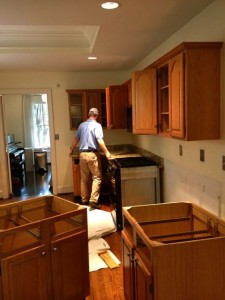 Carson Gettin’ After It

Mandy went on to tell us and physically show us all the ideas she wanted to implement into her new kitchen. Thomas informed her that he could in fact help her with everything she wanted done. To put it lightly, Mandy was ecstatic. She told us she was nervous that contractors were going to keep telling her that her ideas for her new kitchen were too much and too hard to do.

Right away Mandy knew she wanted to hire both the Stand Up Guys Junk Removal crew to take out her old kitchen, and East Cobbs Best Remodeling to design and install her new kitchen. Like I said before, she made the right call. Now all her searching was over, Mandy just had to sit back and watch the magic happen.

The Stand Up Guys Junk Removal Crew, consisting of Carson “The Talent,” Ross “The Mechanic,” and Casey “The Boss,” all arrived back at Mandys Eagle Watch home the following Monday. They all had on their hard hats and were ready to roll. 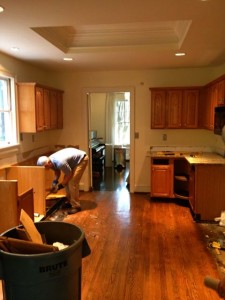 First the Stand Up Guys prepped for everything. They did a quick 5 minute stretch to loosen the muscles since it was going to be a rigorous job, then they got all the tools that they needed out of the truck. They got out the hammers, sledge, trashcan, drop cloths to protect the floor, wrenches for the pipes, screw gun, and their thinking caps.

Now that everything was out of the truck, they strapped up their boots, tightened up their gloves and got to work.

First they focused on all the appliances. They disconnected the dishwasher and rolled it outside. Then they detached the microwave from the wall, then laid it next to the dishwasher outside. After that they unhooked and shut off the refrigerator and rolled that out as well. Then came the hard part, they had to dismantle the kitchen sink, but leave the garbage disposal.

Carson crawled up under the sink and started unhooking everything, while Ross went downstairs to make sure all the water was off. While Carson was detaching the piping from the sink bowl itself, Casey was separating the garbage disposal, Mandy wanted to hold onto that because she had just recently bought it. With the three of them working together they had the sink and garbage disposal detached in a matter of minutes. 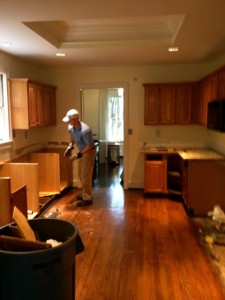 Now that all the appliances were out, the guys stacked them neatly onto the truck, and Ross headed out to take them to the local Goodwill. They wanted to make sure the appliances stayed in good condition, so it was smart to go ahead and get rid of them first. You don’t want to throw appliances in with a bunch of construction and demo debris. That’s a recipe for disaster.

Casey and Carson stayed behind and started in on the rest of the kitchen demo. First they ripped up all the marble countertops and broke them into manageable pieces. Next Casey and Carson pulled out each individual counter and took them outside in full. They were big, but not too heavy, so they felt it was smarter to keep them intact. You always wanna work smarter not harder on the job site.

By the time they had all the counters out Ross had arrived back on site. So all three of them jumped onto getting the junk cabinets off the wall together. With two guys the cabinets might have taken a good hour or two, but with three studs like this, they had those cabinets down and in the truck in under thirty minutes. 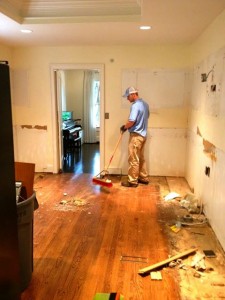 Now that was all the demo! All they had to do now was clean up and make sure the kitchen looked spotless.

Once the guys had all the kitchen junk loaded up into the truck, they headed out from Mandys nice Eagle Watch home and started for the dump. Nothing in this load could have been donated or recycled, so everything was to be trashed.

They were in and out of the dump in no time, and before the guys knew it, they were on the way to the next job. Efficiency is one of the many things we pride ourselves on here at Stand Up Guys Junk Removal. We know that the harder and faster that we work on one job, the faster we can make it to the next (which might just be you).

The Stand Up Guys – The True Junk Answer 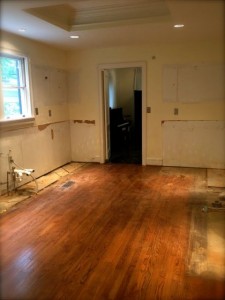 Mandy was extremely happy and also quite impressed with everything. Now that her kitchen was completely gone she could start right away on her new one.

Mandy expressed to us numerous times how happy she was that she called us instead of anyone else. Because she made the right call, she got her kitchen out in no time and she was introduced to a wonderful company that was going to build her a beautiful new kitchen.

For all the home owners in the Metro Atlanta area, if you are looking into getting a new kitchen, bath, or any new addition to your home, give the Stand Up Guys a call. We’ll not only help you out with tearing out the old and hauling away the junk, but we also know tons of contractors, landscapers and many other great companies in the home services field.