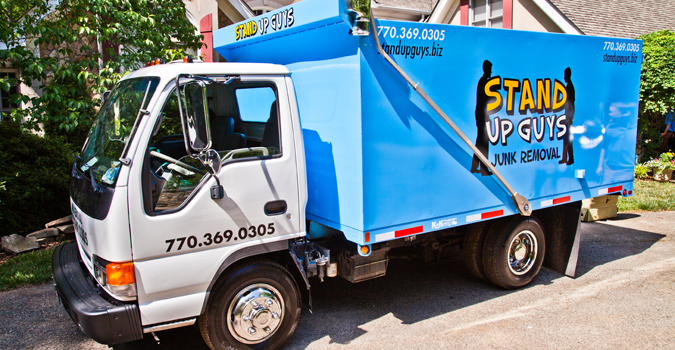 The Stand Up Guys Truck

Mandy was the administrative assistant at a local non-profit organization and needed to clear out the office, and fast! The company was moving locations and she was left to coordinate all the plans for the leftover office furniture and cubicles to be removed.

Not knowing what to do, Mandy frantically called their weekly trash pick up service to if they could take care of the junk for her. She quickly learned they do not do that kind of pick up and started to look elsewhere. There are tons of junk removal companies in Atlanta, she just had to find them.

She decided to take a quick lunch break to figure out her next move. On the way back to the office, Mandy saw a baby blue dump truck with Stand Up Guys Junk Removal on it, and it clicked! That is the type of company she needed. She wrote down the number and gave us a call.

Mandy dialed up the Stand Up Guys number and Casey was quick to answer with “Stand Up Guys Junk Removal this is Casey, how can I help you?” Mandy began explaining her situation to Casey and that the sooner someone could get out there, the better.

Office furniture, cubicles and boxes were the items to be removed. Casey told her anything she needed to get rid of, we’ll take care of it, no need to worry. A sigh of relief was felt over the phone and she scheduled for the next day. 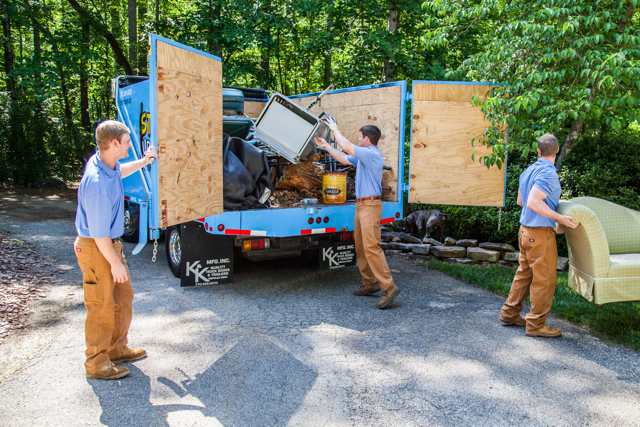 The Stand Up Guys Atlanta crew was quickly on there way to solve Mandy’s problem. The Stand Up Guys Atlanta crew, which is Clark and Christiaan, deal specifically with anything inside the perimeter, North of Georgia Tech. That is there area and they know it well. All the short cuts, transfer stations and recycling joints are planted in their brains.

They arrived at the site and Mandy was already waiting for them. Clark hoped out of the truck and started to take a look at everything she had. After determining how much room her junk would take up in our truck, he presented her with a price, which she gladly agreed upon. She opened up the back doors and the guys began to get to work! This was going to be multiple loads so the guys separated the metal and donations from the junk. One load was going to be junk and whatever was left we could donate or recycle.

Mandy was apart of a non-profit, so Casey emphasized on giving her a deal any way we could. She had some metal there that we they could recycle, so a discount was appointed there. Anything that we could donate was to be a discount as well.

The guys were able to save some tables and chairs that could be donated and some of the cubicles were made out of metal. There was a discounted price given to her from the original price Clark had quoted. She was astounded! Any little breaks like that goes a long way with their type of organization.

After the last little bit was packed in the truck, Clark and Christiaan began to sweep up the area they worked on. The area was completely empty and ready for the new owners to move in.

Clark gave her the receipt and The Stand Up Guys were on there way. Mandy gave them a farewell wave and was on her way as well. Another customer left happy and satisfied…Stand Up Guys approved!