Earlier this week, on Monday, we got a call into our Stand Up Guys Junk Headquarters from a remarkably kind young lady named Janet. We’ve never had the pleasure of working with Janet before, so as this was a new experience for her, we were going to make sure her first impression of Stand Up Guys was a great one. 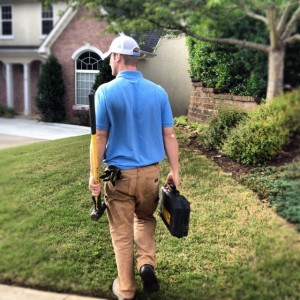 Janet went on to tell us over the phone all about her plans to build an outstandingly large treehouse/playhouse for her three kids, who were all under the age of 11 (so you know they would love a new playhouse). Janet said she had two boys and a girl, along with the fact that they loved to play in the backyard of her Alpharetta home, but that there wasn’t much for them to do.

Janet’s kids were pretty much bound to only playing on the old playset that was in the backyard of the Alpharetta home. In playset standards, this old thing was a dinosaur. That’s why Janet wanted to put something new out there for the kids, she said she didn’t want her kids playing on a junk playset older than she was.

We told Janet she made the right call and that we could help her out with everything. There isn’t anyone you would rather call for you playset removal needs than the Stand Up Guys. I mean we have done countless amounts of playset removals over the years, at this point we are basically the best there are. 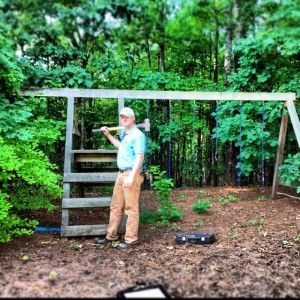 The very same day we sent out one of our office jockeys to give Janet a free estimate on getting rid of the old playset. We always offer our customers free estimates on both junk removal and demo work. We do not feel it is necessary to them to have to pay just for us to come out and take a look.

Janet went on to show Ryan (the office jockey) the old playset that she wanted hauled away. She even told Ryan a little about the old playsets history.

Janet told Ryan that the playset was built by her father, who originally owned the Alpharetta home. He built the old playset for Janet’s older sister at the time, but once Janet was born she had the pleasure of enjoying it as well. So all in all the playset had some rich history to it. 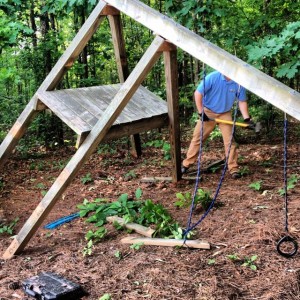 Either way though, the playset had seen better days and at this point just needed to go. Not only was it old and outdated, but it was dangerous as well. Being as old as it was, there were too many wood slivers, and old rusty nails that found their way out of the wood. That’s just not something you want your kids playing around.

Ryan told her the price, that we could do all the demo work, and that we could also haul it all away. Janet was very pleased with the price and emphatically told Ryan, “Let’s do this!” She quickly scheduled a removal date, she actually picked the very next day. Janet was in a hurry to have this thing gone.

Ryan also mentioned to Janet that we knew a great builder in the area that could help her with the new project. We don’t only haul junk away, we also help to bring in the new joys of people’s lives. 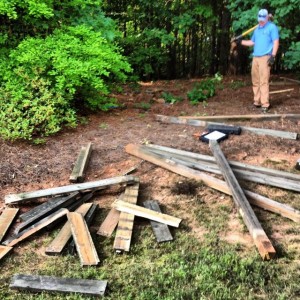 Carson and Casey showed up early the next day ready to roll. They both went to the front door and introduced themselves to Janet. The two Stand Up Guys told her a little about what they were going to do, and that she didn’t have to worry because they would be done in no time.

The two Stand Up Guys unloaded all the necessary tools from the truck, then hauled it all to the backyard where the playset was. This old thing didn’t stand a chance against these junk removal gurus. Casey and Carson are our two most seasoned vets, so there isn’t anything we can throw at them that they couldn’t handle.

First they got out the drill in order to pull out all the rusty old bolts that held all the corner pieces together. Janets dad really put this thing together strong, as if no one would ever take it apart. 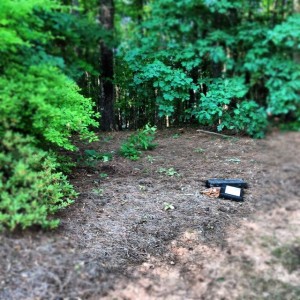 After all the bolts were taken out from the corners, they started to detach the playsets legs so that it would fall onto the ground. Once the playset is on the ground the work becomes much, much easier.

Carson huffed and puffed and blew the playset down, where they then detached everything else. Now the entire playset was in manageable pieces on the ground. That was the hard part, now came the easy part, hauling it to the truck.

It was a hot early May morning, but that didn’t slow these two Stand Up Gurus from loading all the junk playsets debris into the truck quickly. Janet came outside about 30 mins after the guys got started to offer them some water and the first thing she saw was Casey picking up the last of the debris on the ground.

Janet couldn’t believe her eyes, she was stunned by how fast and efficiently the guys tore down the playset and then hauled it to the truck. She told them that they could write the book on playset removal if they wanted to. (Not that anyone would read it). 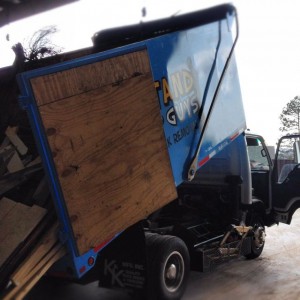 Janet was in a hurry to get that old junk playset out of her backyard, but we could tell that there was a little bit of sadness in her eye when she looked into the backyard for the first time in her life and didn’t see that old thing sitting back there.

But she quickly got over that because she remembered how awesome the new playhouse/treehouse was going to be, and also how happy her children were going to be when the new one was here. Her three kids were glad to watch the playset go as well, they couldn’t wait for the new new to arrive.

Well all in all Janet was extremely pleased with her experience with the Stand Up Guys. She was so pleased that she even called back and scheduled the guys to come out and remove some of the junk from her basement.

We will see you next time Janet, thanks for everything.