Last Tuesday we got a call into the Stand Up Guys Junk Removal Headquarters from Contractor Joe about a job in Roswell. If you follow our blog then you have most likely heard about this awesome customer of ours quite a few times. The last time we saw Contractor Joe was a few months back at a basement junk clean out.

Contractor Joe has been calling and using our awesome services since we first started way back when. He has used us for full property clean ups, demo work and your average everyday debris removal too. The first time the Stand Up Guys ever showed up on one of Joe’s sites was in our old beat up pick up truck and trailer. It was just Casey and Carson back then, man have things come a long way.

We are glad that Contractor Joe stuck with us through the years, even though we looked like a couple of rag’a’muffins back then. Joe told us that we worked hard and offered him a great service, and that is the reason he kept coming back. Joe and other repeat customers a like are one of the biggest factors in our companies growth over the last five years or so. We owe him the world.

The Stand Up Guys take wonderful care of all our customers, but when Contractor Joe calls in, he gets a ‘little extra‘ wonderful service. No matter what he needs, we make sure to get it done. If we have to drop everything we are doing to make Joe happy, we will. He is that important to us. 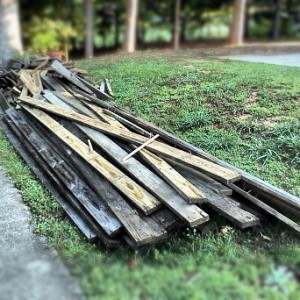 Well when Joe called in last Tuesday, he told us that he was going to need a crew out at one of his customers houses in the Roswell area early the next week. His customer hired him to remodel their old bathroom. He finished that last month and they were so impressed with his work that they wanted him to also build them a new screened in porch.

Joe’s customers wanted their new screened in porch to go right where their old crappy deck was. Joe was more than happy to help them out with it, after all that is his specialty. The problem was that Joe is just way too busy right now to spend too much time at one job.

That’s the reason that Joe had to call upon the Stand Up Guys yet again. In order for him to build his customers a new screened in porch, Contractor Joe needed the old deck torn down. He doesn’t have the time to do that at the moment, so he called in the big guns to come in and tear that old deck down.

Not only could the Stand Up Guys Crew help Joe with the deck demo, but we also can help to remove all the leftover debris as well. Calling the Stand Up Guys Junk Removal Crew to take care of your light demolition work is the true one stop shop.

Tearing Down The Old Deck 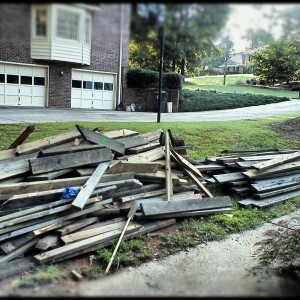 Joe told us that he wanted the deck taken down and removed from the Roswell home later in the week when he would have some time to meet us out there and show us everything he wanted done. We told him we could be out there as soon as Friday. Joe responded with “let’s get ‘r’ done!”

That Friday we deployed three of our very best men. Carson “The Talent” Gibson, Ross “The Mechanic” Lawrence, and Christiaan “The Stacker” Sammons. Here at Stand Up Guys if we have a project that is a MUST we always send out these three. Any obstacle ever put in there way has never stood a chance.

Well the guys arrived right on time at the Roswell home, bright an early Friday morning. Joe was there waiting for the guys. Right when they got there Joe walked them back and showed them the project.

Right away Carson knew that this was going to be a breeze. After all he’s taken down his fair share of decks. Anytime we have a demo job of any sort we send Carson out. He is somewhat of a specialist in the field.

The deck was slightly suspended a few feet off the ground. So height was not going to be an issue at all. Also the deck was pretty old and ragedy, so it wasn’t going to be hard to take apart. 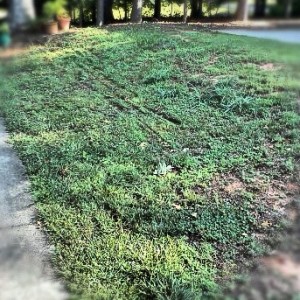 The guys got all the necessary tools out of the truck and got to work. First Carson and Christiaan started on the handrails going around all the edges of the deck, while Ross started to rip off the stairs. The stairs weren’t going to take too long so they knew one guy tearing them out would suffice.

After they got all the handrails off and the stairs were gone, Christiaan got out the sawzall. He took the power tool and cut all the running deck boards into manageable pieces. At the same time he was doing this Ross and Carson were prying those same running boards off the frame of the deck.

Every decking board that they pried off went straight to the side of the house in a big pile. The guys didn’t come in the junk truck today because Stand Up Guys were packed to the gills with work. So Clark and his guys were going to come by at the end of the day and scoop up the pile of decking boards.

The guys had all the running boards cut, pried up and stacked on the side of the house in no time. Next they just had to detach the frame of the old deck and pull the 4×4’s out that were supporting the old deck. Once they got the shovels out they had those bad boys dug up in no time.

Now that the deck was completely down all the guys had to do was finish neatly piling all the old decking on the side of the house and clean up. Well with all three of them working on it at the same time they had it cleaned up and ready for show in under an hour.

Joe was 100% satisfied and so were his customers. 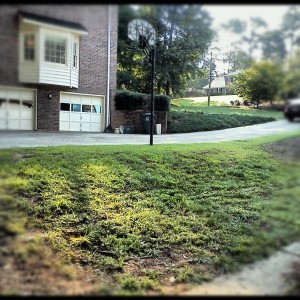 Now that the guys were completely done with the old deck demo, all that the Stand Up Guys Crew had to do was come by and scoop up the remaining debris. Clark and his guys were out and about in the Marietta area late in the day. So they just headed that way when they finished up.

Clark pulled up around 5:30 with an empty truck. Joe’s customers were extremely impressed by our entire operation. They were really surprised to see us that late in the day, and they were also surprised to see us there to pick up the pile of old decking debris the same day that we took it down.

The customer told Clark that they just assumed the pile would sit there for a few days. They have never had the pleasure of working with the Stand Up Guys before, so this extreme attention to detail and wonderful customer service was a little new to them.

Either way Clark was there and ready to roll. The guys backed up to the pile and had everything loaded up into the once empty junk truck in a matter of minutes. Carson and his crew made it really easy on old Clark and those boys. There job could have been much much harder if Carson, Ross and Christiaan didn’t cut all the deck boards to size and stack the entire pile in close range to where the truck could pull up. That’s what we call team work.

All in all the day was a success and once again we were able to make Contractor Joe a happy customer. Until next time Joe, we hope everything goes according to plan.