Early last Wednesday morning we got a call in from one of our customers, Alex. Alex had used Stand Up Guys Junk Removal once before, way back in the early parts of last year for his basement clean out. He had tons of junk that had piled up in his Marietta home, and he called in the pros to take care of it (smart move Alex).

Alex was extremely happy about the junk removal service that we provided him last year, and he sure let us know about it. He gave Stand Up Guys raving reviews on Kudzu, and he went on and on verbally about how happy he was to our crew that was on site that day. All in all, we knew that we were going to see Alex again one day, it was just a matter of when, and not if.

Alex was calling in about getting rid of the horrible eye sore in his backyard, his one and only nightmare. His hot tub.

A Little About The Customer 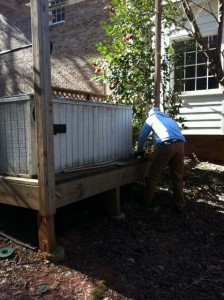 Alex, like we said has used us before, so we know a little about him already. Alex is a family man, that loves his Marietta home. He doesn’t like it messy, and it hates any kind of eye sore on the outside. That’s just one of the reason’s he wanted that hot tub gone.

The other thing we found out about Alex, was the fact that he wasn’t much of a handy man either. He was in the process of building a room addition in his basement last time we were there, and it wasn’t looking so hot at the time. We asked him about it when he called in last week, and he pretty much told us that it didn’t turn out so well, and he had to hire a professional to fix his mistakes. It’s ok though, we like Alex no matter what his handyman skills are.

Another thing we learned about good old Alex, is that he loves his little boy Jason. Jason is his six-year-old son, who loves baseball, and playing with his friends around the neighborhood. Alex said little Jason is a great kid, but also a curious one. Little Jason is always coming home with little scraps and bruises from rough housing with the neighbor kids, and who knows what else. Alex said that little Jason’s mother was starting to get concerned, so they needed to take all the precautions they could. 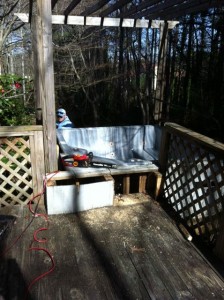 The hot tub itself was an eye sore all together. Its color had faded pretty badly, and the mold was piling up with all the years of neglect. Alex told us that the poor thing hadn’t been working in over 10 years.

The biggest problem with the hot tub wasn’t that it was hideous, but the fact that it was dangerous. Alex and his wife Alicia were terrified that little Jason was going to start messing around over there and get himself hurt. There was a lot of dangerous things that could have happened near that hot tub.

For one, there were open wires everywhere around the hot tub. The other was that they didn’t want little Jason to be crawling under the tiny deck that was holding the hot tub up. They were scared that the deck wouldn’t hold the hot tub, or the mold from the old thing would be under the deck. All in all, there were just too many things that could go wrong with little Jason hanging around that hot tub.

So the problem for Alex in Marietta was simple, get rid of the junk hot tub, but the solution was even easier for Alex. 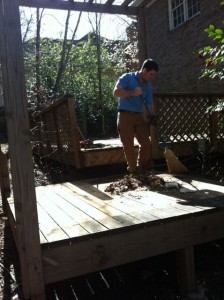 What was the solution you ask?? It was to call in the professionals at Stand Up Guys Junk Removal. When Alex called in last week, he asked if we could be out that weekend, and what did we tell him? “Of course Alex, anything for one of our fav’s.”

On Saturday morning we dispatched two of our finest men, Carson and Clark, and told them what was on their plate, and how important it was. Of course these two Stand Up Guys Big Wigs had no problem with the challenge. They always laugh in the face of adversity, after all, junk is what they do.

Carson and Clark arrived at the Marietta home bright and early Saturday morning. Carson assessed the situation, and right away he knew which tools he needed, and what he needed to do for him and his crew to complete the mission. 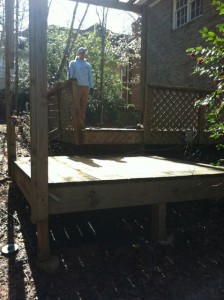 Carson and Clark pulled all the extension chords, blades, and sawzall’s out of the truck. They also brought a trash can, and tarp for the little scraps that came off the hot tub during the removal process. They were being extra careful, and didn’t want to get anything in the yard that wouldn’t be noticeable with the naked eye. Because little Jason would easily find it, and get himself hurt if he wasn’t careful.

First Carson and Clark detached all the wires, and hoses from the house and hot tub. Next they buttoned up all the open wires that were hanging off the porch, and hot tub for safety reasons. Next they sawed the hot tub into about 6 different pieces, this way it would be manageable, and easier to move to the truck.

Next they picked up each piece, one by one, and carried it to the truck. They also cut off three different pieces of the deck that were potentially dangerous to the little one, (at the request of the customer of course).

Once the crew had everything done, and loaded up into the truck, they swept up the now spotless area. Once again Alex was just ecstatic about the whole thing. He was singing the Stand Up Guys praises as loud as he could.

His Marietta home was now that much closer to being perfect just the way that he wanted. Once again the Stand Up Guys Junk Removal Crew saved the day. This hot tub removal was nothing for us… 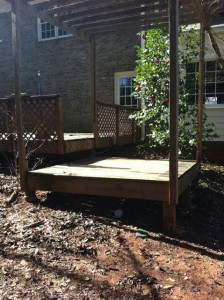